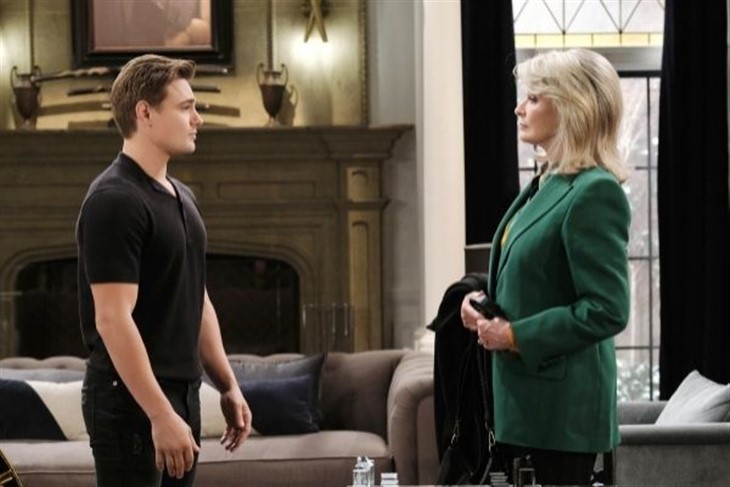 Days of Our Lives Spoilers tease that everyone in Salem believes that they went against the devil, and won! And while it’s true that the demonic entity was driven out of Dr. Marlena Evans (Deidre Hall) on Christmas, he found a new host in Johnny DiMera (Carson Boatman). Johnny’s grandmother, Susan Banks (Stacey Haiduk) figured out the truth almost immediately, but the devil made her forget and Susan went home to Memphis. There’s no way of knowing how long the Devil’s spell will last or if Susan will remember in time to save Johnny!

Days Of Our Lives Spoilers – Johnny DiMera Is Helpless Against The Devil!

Johnny had just married Chanel DuPris (Raven Bowens) when he became possessed. But the devil had other plans for Johnny, so he cruelly dumped Chanel during their engagement party. In addition, even though he promised Marlena that he wouldn’t go through with his plans to produce a movie based on Marlena’s possession, Johnny now plans to go through with making the movie. Johnny’s family and friends just think Johnny is being cruel, they have no idea that he’s actually possessed! By pushing Chanel away, the Devil took away the person closest to him.

DOOL Spoilers – Can Anyone Save Johnny DiMera?

With Susan back in Memphis, at least for now that leaves Marlena to figure out what is happening to her grandson. Once she does, she will encourage Johnny to fight. But she can’t fight the devil all by herself, and Johnny may not be able to hold on much longer. It took Marlena’s whole family to save her, will they be up to the task once again in order to save Johnny!

The Devil’s original endgame was to possess the baby of Ben Weston (Robert Scott Wilson) and Ciara Brady (Victoria Konefal) and that hasn’t changed. But until the baby is born, he is content to cause as much chaos as possible. He’s already tried to seduce Gabi Hernandez (Camilla Banus) and broken Chanel’s heart. In addition, he almost killed Paulina Price (Jackee Harry), Hopefully Susan and Marlena wiil stop Johnny before he does irreparable harm.

Can anyone save Johnny? Will Susan remember in time that her grandson is possessed? What kind of chaos does the Devil still have planned for Salem? Anything can happen in Salem so stay tuned to Days of Our Lives airing weekdays on NBC. And don’t forget to check back right here regularly for all your Days of Our Lives news, information and spoilers!