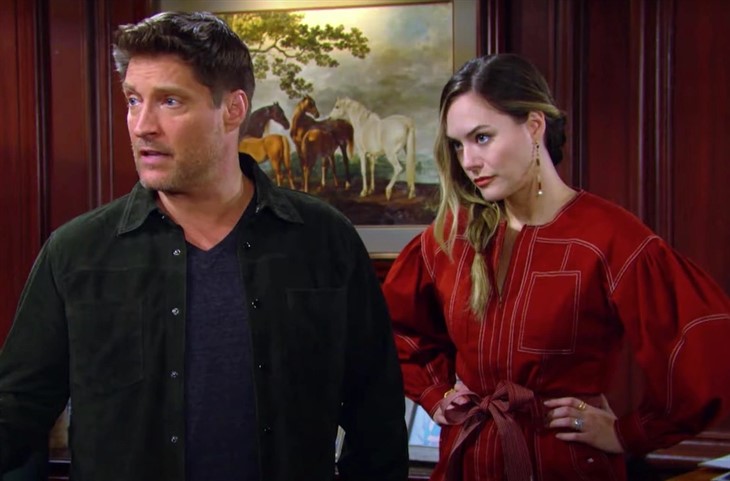 The Bold and the Beautiful spoilers document Deacon Sharpe (Sean Kanan) will be forced to talk about his personal life with Hope Spencer (Annika Noelle). While Deacon has long desired another chance with the perceived loved of his life, he did not anticipate what developed with Brooke Logan Forrester (Katherine Kelly Lang) in the last month.

Hope’s conflicted feelings about her parents being together are being strongly tested. She was told by her mother that a kiss with Deacon happened. But Brooke is mortified, rather than encouraged, by it.

Meanwhile, an increasing number of people are aware of this so-called secret. That implies a continued expansion of the circle of knowledge until Ridge Forrester (Thorsten Kaye) learns the entire story, which Brooke fears will lead to the end of their marriage.

Douglas Forrester (Henry Samiri) is a very smart little boy. He has been through a lot in his young life, which included his father, Thomas Forrester (Matthew Atkinson), using him as a pawn to secure Hope’s yes to an engagement offer.

Viewers recall that Thomas and Hope’s marriage was short-lived in 2019. Last year’s effort toward remarriage flopped as Douglas and Hoped teamed up to stop Thomas’ manipulation.

It appears as though Douglas has reestablished trust with his father. But is that enough to allow Samiri’s character to tell Thomas about seeing the man Brooke was kissing?

Deacon does not believe that Ridge is worthy of Brooke. Focusing purely on the current storyline may not be easy for hardcore fans. But if that is possible, one can conclude that Brooke is solely responsible for the marital troubles Ridge does not yet know he has.

Ridge is convinced that Brooke needs his support as she confronts breaking sobriety after being sober for many years. Fans know that Quinn Fuller (Rena Sofer) gave her alcohol in 2020. But Brooke never became aware of that moral crime, and it remains shelved as a plot point nearly two years after the fact.

Brooke’s cover-up of her actions and continued lies make it likely Ridge will hold her responsible for withholding the truth from him. Deacon’s belief in that scenario and Ridge’s history gives him confidence that a life with Brooke is possible following an anticipated break from her husband.

The Bold And The Beautiful Spoilers – Brooke Logan Forrester Saved By Sheila Carter?

Sheila Carter’s (Kimberlin Brown) actions were more sinister than Quinn’s. That is the deeper reveal, beyond the secrets Brooke is keeping, that could save Lang’s character.

Timing is everything. If Ridge learns what Sheila did, he will defend Brooke. But if he learns that part of the story after the truth about Brooke and Deacon comes out, then momentum will have strongly shifted away, potentially irreparably, from one of B&B’s all-time leading couples.

GH Spoilers Monday, January 31: Sonny Is Ready To Make A Massive Move, Will Carly Let Him?