Days Of Our Lives Spoilers: Wedding Day Disasters On Their Way 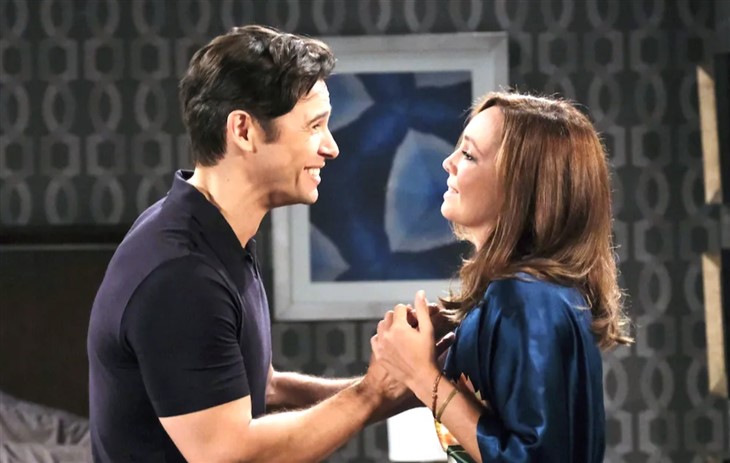 Days of Our Lives (DOOL) spoilers for Thursday, April 21, 2022, reveal Gwen thinking all her dreams are about to come true and she couldn’t be more wrong.

Could a wedding day in Salem ever go off without a hitch? Right after Jack (Matthew Ashford) and Jennifer Deveraux (Melissa Reeves) married in Horton Square, she fell off a balcony and lay in a coma for a year, but it was only a few scenes for us as that year went by before we could blink. Jack’s year went by like sands through the hourglass…

Now, it is time for Jack’s long-list daughter Gwen Rizchech (Emily O’Brien) to wed Xander Cook (Paul Telfer), who is somehow now Jack’s best friend. Too bad Jack’s other daughter has all the evidence on Gwen she needs to bring the woman down. Yes, Gwen wore a Sarah Horton (Linsey Godfrey) mask. Yes, Gwen conked her over the head so that Kristen DiMera (Stacy Haiduk) could kidnap her to that island. And yes, Gwen knew where Sarah was and did everything she could to keep it from Xander.

Hence, the happiest day of Gwen’s life becomes the saddest day of Gwen’s life when her sister reveals all and Xander declares there is no way he will marry her. This should only serve to harden Gwen as she will want revenge after feeling she was wronged. What will happen to Abigail DiMera (Marci Miller) during May sweeps? Do we even want to think about it?

DOOL Spoilers – Ben Weston Has Suspicions Of His Own

As Ben Weston (Robert Scott Wilson) spends some man-to-man time with his buddy Jake DiMera (Brandon Barash), he wonders if Jake might be more involved with Ava Vitali (Tamara Braun) than he is letting on and warns him this might not sit too well with Gabi Hernandez (Camila Banus).

As for Ava, she has some news for Rafe Hernandez (Galen Gering) and Gabi and it’s sure to make both of them infuriated. Did Rafe know what he was getting himself into with this woman? It’s safe to say the answer is no. Too bad he listened to Nicole Walker (Arianne Zucker). After all, Ava was her best friend, but both women showed they have no loyalty. Stay tuned to Days of Our Lives weekdays to see how these stories play out.

Days Of Our Lives Spoilers: Xander Returns To His Criminal Ways!