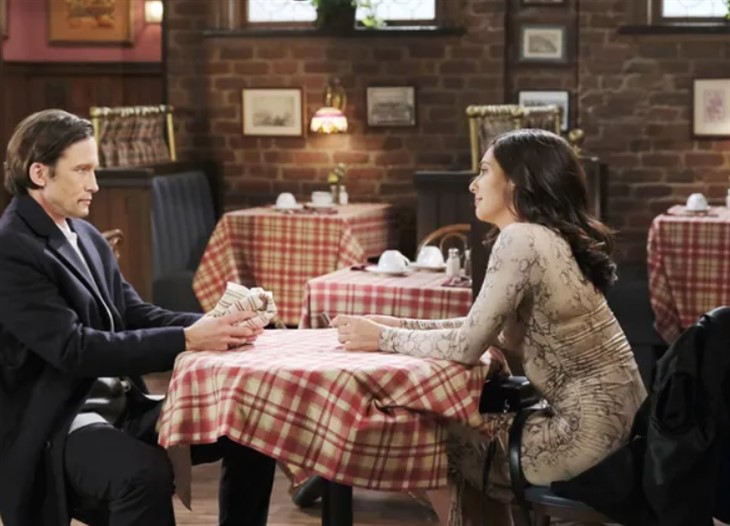 Days of Our Lives (DOOL) spoilers tease that Gabi Hernandez (Camila Banus) will set up Philip Kiriakis (Jay Kenneth Johnson) for a big takedown in an upcoming episode of Days of Our Lives!

Days of Our Lives viewers will recall that Gabi has already gotten Philip to trust her. She was able to convince him to save her business, Gabi Chic when EJ DiMera (Dan Feurreriegel) divested it. Now, instead of a DiMera Enterprises company, it’s a Titan company! Thanks to Paulina Price (Jackeé Harry) she wasn’t able to use her storefront any more, which was bought from under her for Sweet Bits Bakery – which was another front to be torn down for Price Town – but at least she’s got her company. Days of Our Lives viewers will recall that Philip saved the day for her at the time. However, Philip would do well not to trust the scheming Gabi, who will deceive him into a huge takedown and later on in the week she’ll let Jake DiMera (Brandon Barash) in on her secret takedown plans for Philip!

Days of Our Lives viewers will recall that prior to the two week pre-emption of Days of Our Lives for the Tokyo Olympics, that Gabi was the one who saved Sami DiMera’s (Alison Sweeney) derriere from her affair with Lucas Horton (Bryan Datillo) from being exposed. Kristen DiMera (Stacy Haiduk) had sent EJ a letter detailing that Sami had been cheating on Lucas! Originally, Gabi had come across the letter among some mail she had gone to pick up after she and Jake were evicted from the DiMera mansion by EJ. Jake wanted to use it against EJ but Gabi wouldn’t let him – and returned the letter to Sami, who is Gabi’s friend. Days of Our Lives viewers will recall that Sami attempted to burn it in the fireplace, but Lucas was lurking nearby and retrieved it before it completely burned up!

Days of Our Lives viewers will also recall that after Lucas retrieved the letter, he and Philip, who is his maternal half-brother, sat and talked in Brady’s Pub as to how Lucas could get Sami away from EJ and back to him! Lucas had the letter, and showed it to Philip. Philip read it with interest, but Lucas decided to drop the plan to use the letter against EJ for fear that he would retaliate against Sami. In the meanwhile, another marriage broke up shortly after their meeting when Xander Cook (Paul Telfer) exposed his and Nicole Brady’s (Arianne Zucker) one night stand at Nicole and Eric Brady’s (Greg Vaughan) anniversary party! Of course, it was Sami’s idea and she paid Xander to spill the sordid tea publicly! Days of Our Lives viewers saw Nicole ready for revenge on Sami because she knew she was behind it!

Days of Our Lives viewers will recall that Philip pulled Kristen’s letter out of the garbage can, and later gave it to Nicole after witnessing the sordid exposé at the anniversary party. Nicole promptly gave it to EJ at his office, who swept his desk clean in fury after reading it, and Days of Our Lives viewers will recall that EJ came to Sami afterwards, and unusually calm. That is because it is more like the calm before the storm! Later EJ will throw Sami out of the mansion and Gabi will find out that somehow he got the letter that Sami tried to burn! Gabi will likely ask Philip what happened and he might blunder the truth out himself that he came into possession of said letter and gave it to Nicole! Gabi in turn will keep her cool in his presence and set him up for a takedown, that she will share the details of with Jake later in the week!