Days Of Our Lives Spoilers: A Furious Abigail DiMera Gets Into A Fight With Gwen Rizchech At The Cemetery 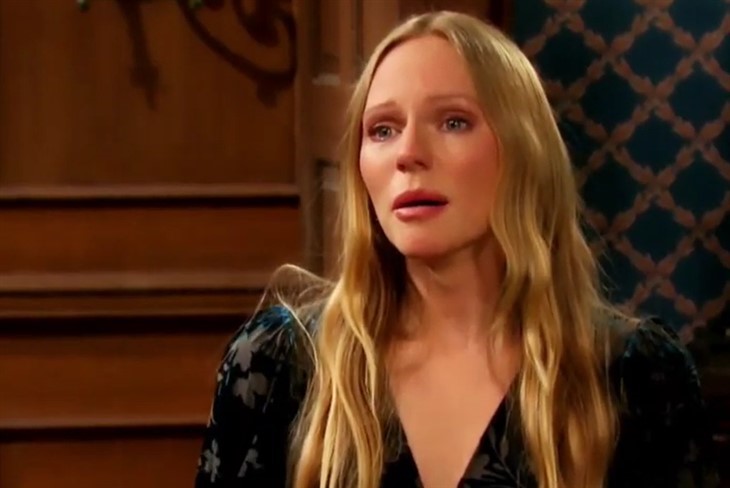 Days of Our Lives spoilers tease that a furious Abigail DiMera (Marci Miller) will get into a fight with Gwen Rizchech (Emily O’Brien) at the cemetery in an upcoming episode of Days Of Our Lives!

Days of Our Lives viewers will remember that Laura Horton (Jaime Lyn Bauer) died as the result of what Gwen told Jack Deveraux (Matthew Ashford) was an accidental fall in her hotel room at the Salem Inn. However, Gwen didn’t call 911 first, she called Jack, and mostly told the truth of what happened although not all of it. Gwen didn’t tell Jack that she and Laura had been arguing and that she had grabbed her arm after shouting she wanted revenge, and she appeared to have delayed calling Jack for a while as Laura lay bleeding on the floor!

Apparently Gwen’s narrative satisfied Rafe Hernandez (Galen Gering) as she was questioned and released, but Abigail doesn’t believe that Gwen was totally innocent in Laura’s death. Neither does Jake DiMera, (Brandon Barash) and she and he may have discussed his suspicions with Abigail as Chad DiMera (Billy Flynn) helped his wife deal with the tragedy. Gwen was very angry at Laura when she came to Gwen’s room wanting to explain what she had done and to make amends. She had tried to tell Gwen that while she couldn’t go back in time and change things for her, that Gwen has a family now. So far, only Jack has wanted to make up for any lost time, however. Feeling guilty for his not being there for Gwen as a child, he is an easy mark for Gwen’s manipulations and that is exactly what Abigail thinks has happened once again!

Abigail knows that Gwen was the one who spiked her drink with a hallucinogenic substance obtained from Dr. Wilhelm Rolf (William Utay) although it never has been sufficiently explained how Gwen knew of him! Gwen is currently facing charges for that, and then there is Gwen’s attack on both Abigail’s and Chad’s marriage, and Jack and Jennifer Deveraux’s (Cady McClain)! Jennifer will be leaving town for Boston right after the funeral to settle Laura’s affairs and estate there, so Abigail knows that it is up to her to get justice for her grandmother! Jack is too torn and too manipulated because of his guilt. She can easily see Gwen, younger, stronger and taller than Laura, overpowering her and causing the fall that caused her to bleed out from a head wound on the floor.

The wound was right at her temple, while the fall seemed to be in a direction opposite the table where Gwen said she hit. Abigail is not a detective but she is an investigative reporter. Her father’s judgment is definitely clouded. She looked at the crime scene photos although technically either she or Jack would have had a conflict of interest in writing the story for the Salem Spectator. While Gwen did not attend the funeral, she showed up at the cemetery as Abigail remained. Abigail is in no mood for an interloper who probably bashed her grandmother’s head into the corner of the table to show up! She will let Gwen have it full force and tell her she knows she is not innocent in Laura’s death, and she intends to prove it! As one can imagine, it turns into a full-fledged catfight!

Royal Family News: Every Royal But The Queen Should Work?