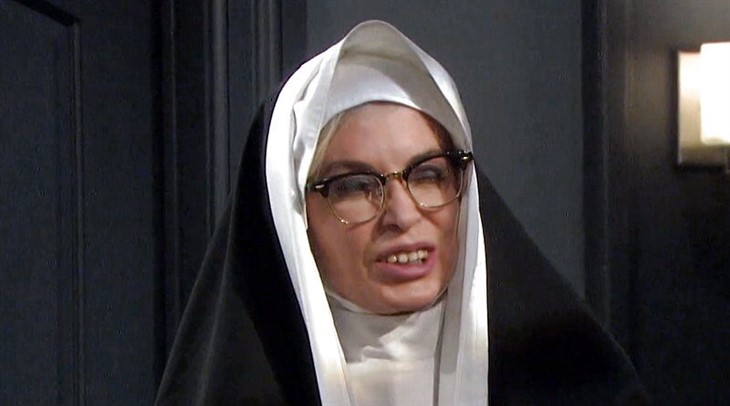 Days of Our Lives spoilers indicate that Sister Mary Moira Banks (Stacy Haiduk) will hit Salem this week in preparation for Susan Banks’ (Stacy Haiduk) memorial. However, the sister is not happy with Nicole Walker (Arianne Zucker) being at the Dimera Mansion and wants her gone.

Nicole’s latest drama, leaving Rafe Hernandez (Galen Gering) to reunite with Eric Brady (Greg Vaughan) isn’t exactly a secret. Neither is the fact that Eric was arrested for punching E.J. recently. The more Sister Mary Moira hears about Nicole, the more she will want E.J. away from her. The news of Jada Hunter’s (Elia Cantu) abortion will be too much for the sister to hold bad from.

Sister Mary Moira is likely to accuse Nicole of using E.J. now that Eric doesn’t want anything to do with her. Or course this is not Nicole’s intention at all. E.J. is the one who asked her to move in with him. Nicole thought it was a bad idea but E.J. seems to need some company right now. Nicole believes she is helping E.J. by being in the house.

Nicole already feels bad about everything that has happened in the past few days. Sister Mary Moira tearing into her isn’t going to help and may even make Nicole feel worse. Of course, Nicole will probably be accused of shacking up with E.J. to take advantage of his money.
It seems that Sister Mary Moira may end up getting mixed up in some more drama in Salem as well. Will E.J. end up coming to Nicole’s defense and ushering Sister Mary Moira out of town? Could Sister Mary Moira stick around longer than she originally planned?

B&B Spoilers: Steffy And Finn Are After Sheila