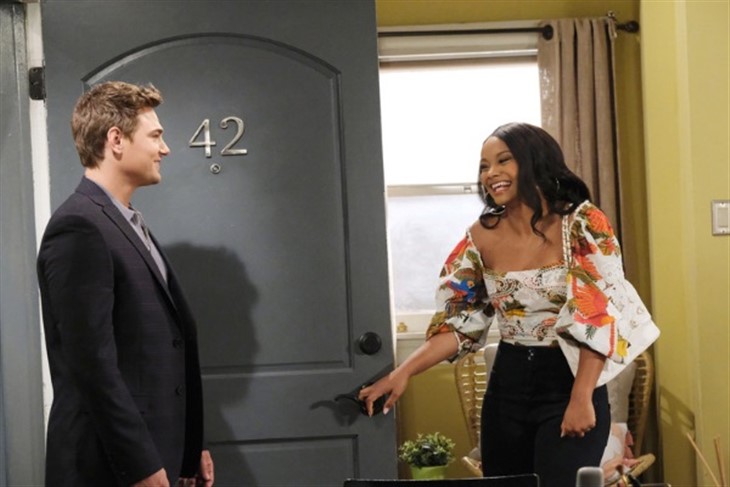 Days of Our Lives (DOOL) spoilers for Wednesday, December 7, 2022, reveal Chanel needing a friend and Johnny more than happy to be whatever Chanel wants.

Days Of Our Lives Spoilers – Unresolved Feelings Between Johnny And Chanel?

Chanel Dupree (Raven Bowens) did not expect to see what she found when she attempted to go back to work after being released from lockup. The word MURDERER was plastered across the Sweet Bits window and Chanel spent the rest of the morning trying to wash it off with Sloan Petersen (Jessica Serfaty) watching from nearby and then taunting the girl who had an affair with her father.

It’s a good thing that Johnny DiMera (Carson Boatman) is also in the Square because he is there to lend Chanel a listening ear and be her friend. They must sense that they are being talked about in jail as Chanel’s mother and Johnny’s uncle got to know each other a little better.

Things haven’t been going well for Abe Carver (James Reynolds) since Election Day. He won another term as mayor and was ready to step down just for new Governor Paulina Price Carver’s (Jackee Harry) sake and move to the capitol with her. Then, Chanel Dupree was arrested and all hell broke loose.

Now that Paulina is also behind bars for her role in the Chanel coverup, Abe’s term as mayor may end sooner than he expected. Salemites (the ones we don’t know) aren’t liking what they are seeing and start demanding a recall election. Might Abe’s local political career be over?

With her relationship with Eric Brady (Greg Vaughan) officially over, especially after she had an abortion, Jada Hunter really needs a friend and Rafe Hernandez (Galen Gering) is there to provide that friendship. She tells him what she decided to do about the pregnancy and he is nothing but supportive of that decision. Does she mention the words she had with Nicole Walker (Arianne Zucker) right before her decision?

As for Eric Brady, he fires his sister Belle Black Brady (Martha Madison) as his lawyer and decides to hire Sloan. The pair certainly got alone when they met in lockup. Stream Days of Our Lives weekdays on Peacock by 6 am EST to see how these stories play out.