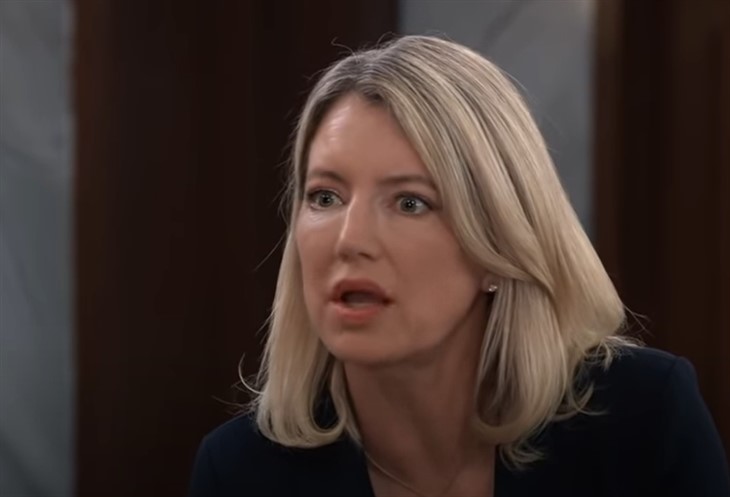 General Hospital (GH) spoilers tease Nina Reeves (Cynthia Watros) has been feeling rather insecure about her place in Sonny Corinthos’ (Maurice Benard) life lately. Although Sonny continues to reassure her they are solid, she can’t shake the feeling that their arrangement is less than permanent, and that Carly Spencer (Laura Wright) will never be far enough outside of Sonny’s orbit to let him move on.

Although Nina understands Carly and Sonny will always be in one another’s lives because they are still co-parents to their daughter, Donna Corinthos (Scarlett Brielle), she did not expect Carly to end up involved in Sonny’s business — something Sonny hasn’t really introduced Nina to.

When Dex Heller (Evan Hofer) was shot while trying to free Anna Devane (Finola Hughes) before she was sent to Pentonville, he found respite and care in Josslyn ‘Joss’ Jacks’ (Eden McCoy) care. While he recovered in her dorm room, Carly stumbled upon his presence there and Joss and Dex are grateful she did. Carly placed a call to Brick (Stephen A. Smith), who secured antibiotics for her to take to Dex.

It doesn’t appear Brick knows who the antibiotics were for, but Carly came through for Dex since her daughter had already gotten involved. She could hardly pretend she didn’t understand after years of getting entangled in similar situations herself. When Sonny figures out that Dex was actually recuperating in Joss’ dorm room, and that Carly knew it and covered for him, he’s not going to be happy that Carly lied to him or got involved.

Carly is no stranger to Sonny’s business, but she is his ex-wife now. He expects her to stay in her lane, and poking around in his organized crime organization is the last place he would’ve expected to find her. That being said, it’s not like Carly went looking to get involved. She was looking for her daughter. She didn’t expect to find a wounded Dex in Joss’ bed. Sonny could be gracious enough to thank her for taking care of Dex, but he’s probably going to be too ticked off that Dex and Carly both lied to him — and likely suspicious about why. Is something going on between those two?

The real kicker will happen when Nina finds out about Sonny’s meeting with Carly. She just might walk in on this one. Picture Sonny and Carly going round for round and Nina shows up, prompting them to become silent. Nina is going to know something pretty important is being discussed, but because it’s a part of his business, Sonny won’t be willing to discuss it with Nina. As he tells her not to worry about it, she’s going to feel more unnerved than ever that Sonny now has a secret he’s comfortable talking to Carly about but not her. This won’t end well. Stay tuned for more General Hospital news and spoilers just ahead.