B&B Spoilers: Steffy And Finn Are After Sheila

The Bold and the Beautiful (B&B) spoilers for Thursday, December 8, 2022, reveal Deacon freaking out when Steffy and Finn show up at his door.

Deacon Sharpe (Sean Kanan) knew his time having all the sex he wants with Sheila Carter (Kimberlin Brown) had to be coming to an end. He just didn’t realize it would happen so soon. It was all too good to be true and he warned her that she’d be found out at some point. Well, now that some point is almost here. 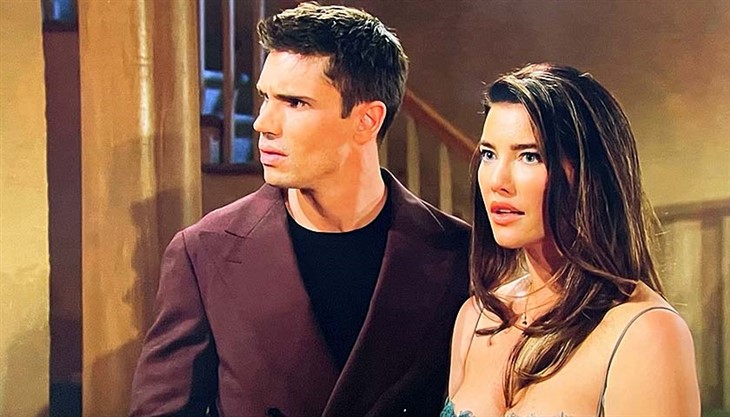 When Steffy Forrester Finnegan (Jacqueline MacInnes Wood) and John ‘Finn’ Finnegan (Tanner Novlan) show up asking questions, Deacon knows the time is near and is relieved that Sheila took off in her bad disguise just to have some fun and get some fresh air. He worried she would be caught just by leaving his apartment, but now it’s better that she keeps taking these risks.

He manages to get Steffy and Finn to leave but they are still not sure he is on the up and up. After all, he was acting awfully strange and Deacon has been known to tell many lies before.

It’s time to move on and Carter Walton (Lawrence Saint-Victor) is right there wanting to start a relationship. However, Katie can’t even be sure that Carter will remain faithful considering his own track record going from woman to woman. So, she asks him the million-dollar question.

Is he over Quinn Fuller (Rena Sofer) and would Katie just end up being someone’s consolation prize again? She has already experienced this enough with Bill. She does not want to go through it again with Carter. What will Carter say? He really thought he could build a life with Quinn, but then she was gone before he could blink. Stay tuned to The Bold and the Beautiful weekdays to see how these stories play out.