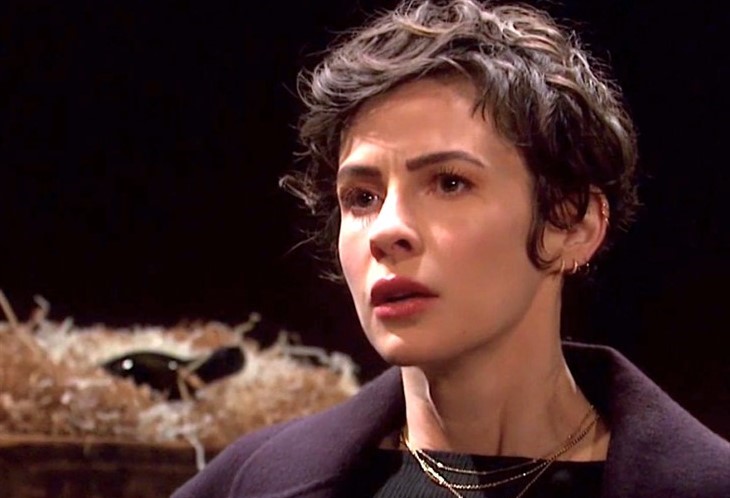 Days of Our Lives (DOOL) spoilers reveal that Sarah Horton (Linsey Godfrey) returns the week of January 17. However, Abigail DiMera (Marci Miller) makes an accusation, which could be that Sarah isn’t who she says she is. Sarah will try to prove her identity, but Gwen RIzczech (Emily O’Brien) could interfere. Will Gwen be inspired by Ava Vitali’s (Tamara Braun) mind games?

DOOL spoilers reveal that Sarah returns during the upcoming week. However, there is speculation that Sarah might not be herself. Of course, that is always a possibility, especially with Kristen DiMera (Stacy Haiduk) involved. Let’s say that Sarah does return as herself. What happens next?

The weekly preview shows Sarah talking with her mother, Maggie Horton Kiriakis (Suzanne Rogers). Then, Xander Cook (Paul Telfer) walks into the Kiriakis mansion to face the good doctor. Xander is stunned to finally face Sarah after nearly a year. Sarah will definitely have a wild story to tell.

Xander and Maggie might believe it’s really Sarah, but there is one person who has doubts. Abigail will pepper Sarah with questions and then makes a shocking accusation about the Salemite. That accusation is probably that Sarah isn’t herself, and it’s just another mask. Sarah will try to prove her identity, but that might be easier said than done.

Days of Our Lives spoilers reveal that Gwen has been panicking about losing Xander if Sarah returns. Once Sarah is back in Salem, Gwen’s fears could come true. Gwen will be desperate and will probably do anything to keep Xander by her side. Gwen could get some inspiration from her new pal and partner in crime, Ava Vitali.

As fans know, Ava is playing mind games with Rafe Hernandez (Galen Gering) and Nicole Walker (Arianne Zucker). Gwen could use a similar tactic to mess with Xander’s head. Gwen isn’t so much concerned about Sarah returning, she just needs Xander not to reunite with her. So, all Gwen has to do is put a seed of doubt in Xander’s mind.

We do know that Xander proposes to Gwen in the near future. There is no confirmation that the wedding actually happens, though. So, we will have to see which woman Xander chooses.

What do you think of Sarah Horton’s return? Do you believe it’s the real Sarah or just another impersonation? How will Gwen prevent Xander from reuniting with his former flame? Tell us your thoughts and remember to keep watching the NBC soap to see what happens next.