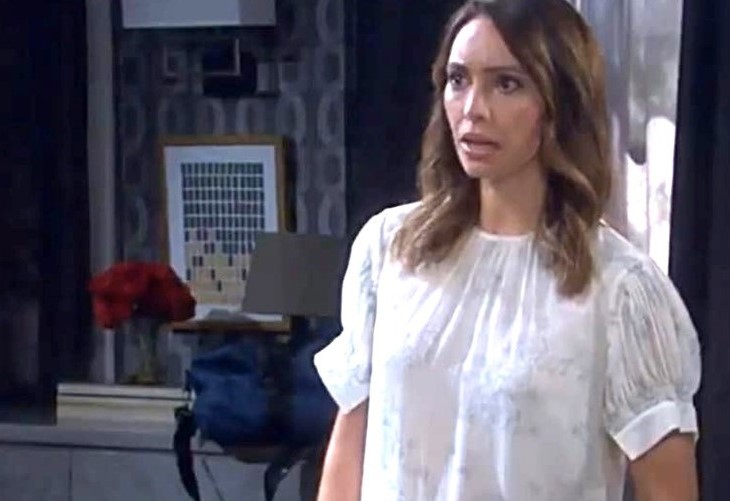 Days of Our Lives spoilers tease that Gwen Rizchech (Emily O’Brien) can’t believe her eyes when Sarah Horton (Linsey Godfrey) shows up on her doorstep in an upcoming episode of Days of Our Lives! Maybe she shouldn’t – is it really Sarah or is it an imposter?

Days Of Our Lives Spoilers – How Can It Be Sarah Horton When Xander Cook And Abigail DiMera Are Still Following Up On A Lead?

There is a very important question before Gwen before she decides to believe whether the person on her doorstep is really Sarah or not. How can it really be Sarah when on the same day she shows up, Xander Cook (Paul Telfer) and Abigail DiMera (Marci Miller) are still following up on leads, and Steve Johnson (Stephen Nichols) is confronting Kristen DiMera (Stacy Haiduk)?

Days of Our Lives viewers will remember that Gwen knows that Kristen kidnapped Sarah while impersonating her, dumping Rex Brady (Kyle Lowder) in rapid succession after dumping Xander, that was what Kristen used to blackmail Gwen into helping her escape! Besides, if it really was Sarah and not an imposter, would she not have checked in at the Kiriakis mansion first to let her mother Maggie Kiriakis (Suzanne Rogers) know she’s okay and back in town?

DOOL Spoilers – How Could Sarah Horton Have Escaped And Found Her Way Back On Her Own?

Days of Our Lives viewers wonder how Sarah could have escaped and found her way back to Salem on her own, considering the shape she was in when Kristen stuffed her into that steamer trunk! Days of Our Lives viewers will recall that Kristen stabbed Sarah with the same syringe that Gabi Hernandez (Camila Banus) and Abigail were going to stab Gwen with in the DiMera wine cellar!

This was also the same thing Abigail was drugged with by Gwen, only instead of injecting her she spiked her drink, and it took months for Abigail to recover her right mind! There is a good possibility that the drug causes even more damage in an injectable form than it does taken by mouth, where the stomach would control how much gets into the bloodstream as the drug is digested! Sarah was unconscious when she was put in that steamer trunk and shipped to the island, and then there would have had to be someone to imprison her when she came to – if not she’d be dead by now!

Days Of Our Lives Spoilers – If Someone Is Impersonating Sarah Horton Again, Who Could It Be?

Days of Our Lives viewers will remember that Kristen has impersonated Susan Banks’ (Stacy Haiduk) nun sister, Sister Mary Moira Banks (Stacy Haiduk) before, and there’s a possibility that somehow she has convinced her to “return the favor!”  Kristen conned Susan into impersonating her in Statesville Prison for several months while she kept an eye on Brady Black (Eric Martsolf) in Salem.

It’s possible that the person Steve Johnson and Kayla Johnson (Mary Beth Evans) find while infiltrating the convent in Italy is not Kristen at all, but Sister Mary Moira impersonating Kristen! That would leave Kristen free to move Sarah to a different location before being found and Kristen to once again impersonate Sarah to throw her pursuers off the track! If this really is Kristen, you can bet she’ll reveal herself to Gwen with further threats being given!