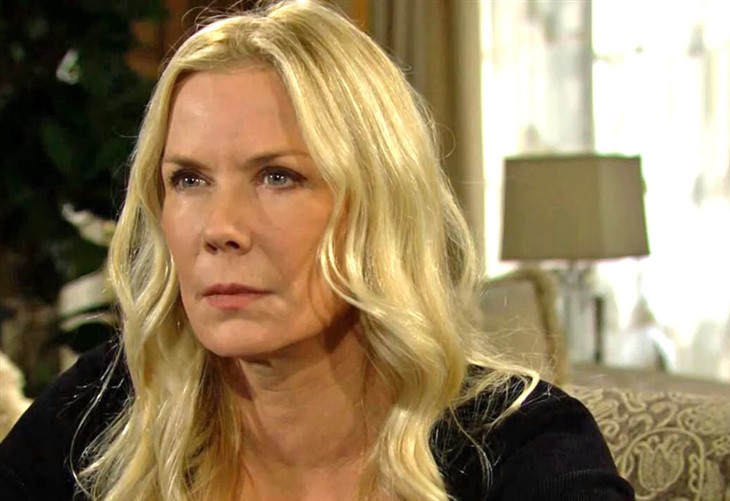 The Bold and the Beautiful (B&B) spoilers reveal that Brooke Logan Forrester (Katherine Kelly Lang) plans on getting rid of Deacon Shape (Sean Kanan). However, she has to do it without jeopardizing her marriage. Brooke could destroy Deacon and Hope Logan Spencer’s (Annika Noelle) relationship. Will Brooke claim that Deacon slipped her alcohol and took advantage?

The Bold And The Beautiful Spoilers – Getting Rid of Deacon Sharpe

B&B spoilers reveal that Deacon is becoming a real problem for Brooke. Lang spoke to Soap Opera Digest about the “Beacon” secret and Taylor Hayes (Krista Allen) snooping around for information. The actress explained that Brooke just needs Deacon to go away.

“The last thing she needs is Taylor sniffing around after this has happened with Deacon, so she’s really trying to get rid of both of them.”

After Deacon professes his love and devotion to Brooke, she tries ushering him out the door. Brooke doesn’t want to take any chances of someone eavesdropping or seeing them together. Most of all, Brooke wants to be sure that Ridge Forrester (Thorsten Kaye) doesn’t find out what really happened on New Year’s Eve.

Even though Deacon makes time to see Brooke, he hasn’t stopped by the cabin to see Hope. Confused about Deacon’s sudden disappearance, Hope has grilled Brooke. However, Hope still doesn’t know the truth.

The Bold And The Beautiful Spoilers – Brooke Logan Forrester’s Desperation

The Bold and the Beautiful spoilers reveal Hope and Liam Spencer (Scott Clifton) have their suspicions. Hope tells Brooke if there is anything that she hasn’t confessed to yet, to do it now. That could force Brooke to take drastic action, but she also doesn’t want to destroy her relationship with Ridge. So, could Brooke do the unthinkable in order to play victim and make sure nobody believes Deacon?

It’s possible that Brooke will claim to Hope that Deacon must have slipped her alcohol. When Hope questions why Deacon would do such a thing, Brooke will play it as if she is a victim. However, if this happens, the plan will backfire. Hope, Liam, or Ridge could insist on calling the police, which would launch an investigation. It would also destroy Hope and Deacon’s relationship. Hope will believe her mother and won’t want anything to do with Deacon ever again.

The other possibility is that Douglas Forrester (Henry Joseph Samiri) will expose the truth. Would Brooke really stoop as low as to gaslight an innocent child to protect her secret? Not only will everyone find out the truth, but it could set the stage for Thomas Forrester (Matthew Atkinson) reclaiming his son from the Logans.

Tell us what you think Brooke’s drastic move is when her secret threatens to come out. How will this story end, and what will Ridge do about his marriage?