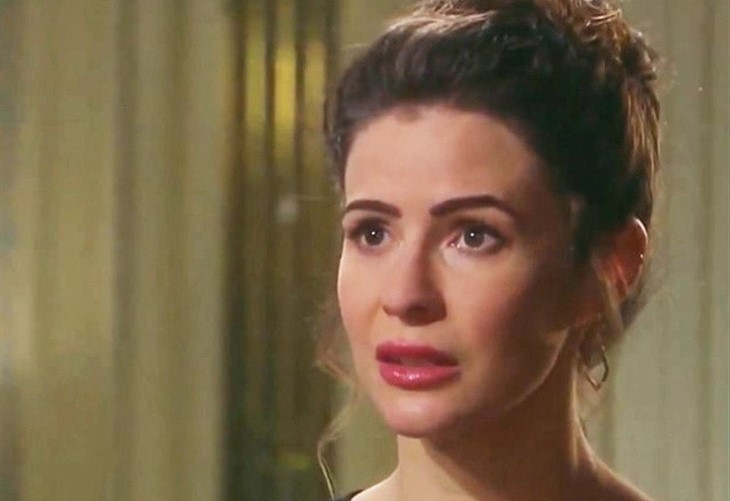 DOOL spoilers reveal that during the week of January 17, Kristen tries to gain the upper hand. Knowing that Kayla Johnson (Mary Beth Evans) is scoping out the convent looking for her, Kristen surprises Steve in his hotel room. Kristen has a gun and is prepared to use it. However, she doesn’t shoot Steve but does knock him unconscious.

One interesting tidbit from Soap Opera Digest is Kristen believes Steve is in Italy looking for Sarah. Kristen tries to impersonate Steve via text message, but Kayla might sense something is wrong. Maybe it’s Kayla that ends up saving Steve, but Kristen probably gets away. Kayla might also discover Sarah stashed in the basement or a locked room in the convent.

Sarah returns to Salem during the week of January 17. When Sarah comes back, she will have an emotional reunion with her mom, Maggie Horton Kiriakis (Suzanne Rogers). Then, Xander Cook (Paul Telfer) sees Sarah and is stunned.

Others will learn about Sarah’s story, but some don’t believe it’s the real Sarah Horton. If Kristen escaped Steve and Kayla’s grasp, then it’s understandable why Sarah would be asked to prove her identity.

Days of Our Lives spoilers reveal that Abigail will want to be sure it’s the real Sarah. Abigail will interrogate the doctor by peppering her with questions. Even though Sarah probably answers all the questions correctly, Abigail doubts it’s really her cousin. After all, Kristen has fooled people many times before. It is confirmed that Abigail ends up making a shocking allegation about Sarah, which must be that she’s really Kristen in a mask.

A few years ago, Kristen tried to attack Susan Banks (also played by Haiduk). Kristen had everyone fooled by wearing a mask. At the time, everyone was at a large party, so when Kristen’s mask was forcibly ripped off, her true identity was revealed.

It’s possible that a similar situation will happen with Sarah. Could Abigail be so convinced that it’s Kristen that she tries ripping her face off? What happens when Abigail doesn’t peel off a mask, but just yanks at Sarah’s delicate skin? Talk about an awkward homecoming!