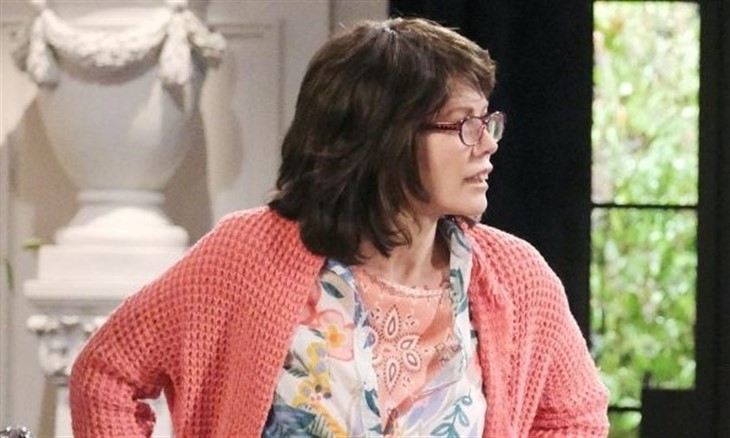 Days of Our Lives spoilers reveal the tragedy and horror that are supposed to come with Ava’s endgame story, one in which she has completely lost her mind.

Days Of Our Lives Spoilers – Talking To Ghosts

When a woman who seemed sane walks into a crypt to say goodbye to a man she loved and ends up talking to her dead sociopathic son for weeks on end as he convinces her to do horrific thing after horrific thing. If it wasn’t for what seems like a mental break where Ava Vitali (Tamara Braun) keeps seeing Charlie Dale (Mike Manning), she never ever would have thought of kidnapping Susan Banks (Stacy Haiduk).

It is also Charlie’s idea to kill Susan and it looks like it becomes a suicide mission. Instead of killing Susan, for the moment she just lets EJ DiMera believe that his mother is dead, even when he finally decides to give her ransom money.

However, that ploy is over soon when Susan rushes in and EJ is relieved to believe she is alive. That enrages Ava so she grabs onto Susan and drags her into her car and rushes off. Ava is not in her right mind at all and still hears Charlie, so that cannot be a good thing.

DOOL Spoilers – Ava Vitali Is Not Thinking At All

In her quest to do whatever Charlie tells her to do, Ava drives at lightning speed and then sends the car with her and Susan in it right over a cliff. EJ watches as it happens and he feels helpless as he watches the vehicle explode, not sure if his mother was really in the car or not.

“EJ is an absolute mess,” Daniel Feuerreigel said in the November 28, 2022, issue of Soap Opera Digest. “He’s trying to deal with what’s straight in front of him. He starts to retroactively go over what he could have done differently because he starts to blame himself. Every single thing he did was for his own ego and now look what’s happened.”

While it appears that both Ava and Susan are dead, we all know nobody is ever really dead in Salem, so Dr. Wilhelm Rolf (Richard Wharton) may eventually pull a miracle out of his mad scientist hat. Stream new episodes of Days of Our Lives weekdays on Peacock starting at 6 AM EST.

GH Spoilers: Holly Makes A Desperate Move, Will Victor See Through It?

Sister Wives Spoilers: Is Kody Brown A Bad Influence On The Children?