GH Spoilers: Holly Makes A Desperate Move, Will Victor See Through It? 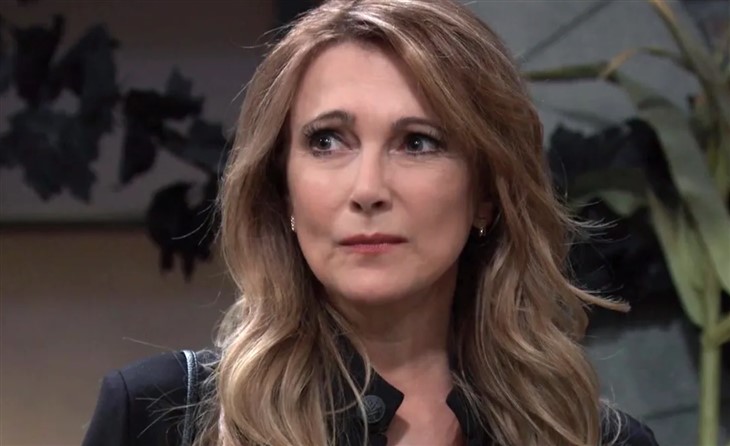 General Hospital (GH) spoilers and updates tease that Holly Sutton (Emma Samms) will make a desperate move; will Victor Cassadine (Charles Shaughnessy) see through it? Robert Scorpio (Tristan Rogers) now knows that she’s working with Victor under duress, but he can help her; will she try to trick Victor with Robert’s help?

Robert likely figures out that the leverage the Cassadine has over Holly is that he’s captured her son, Ethan Sutton (Nathan Parsons) and if she doesn’t do his bidding he’ll die. Robert figures that Ethan hadn’t given up looking for his mother, even though in Monte Carlo Winston Rudge (David S. Lee) had claimed she was dead. When Robert started becoming suspicious, egged on by Laura Collins (Genie Francis) he checked his phone, and there were no outgoing calls to Ethan.

In fact, there weren’t even any outgoing calls to any unknown numbers, ruling out that she’d tried to call him on a new number or a burner phone. That’s when he figured out, after Holly admitted she was doing Victor’s bidding not of her own will that he had Ethan.

Holly is tasked with stealing the necklace that Peter August (Wes Ramsey) left to Britt Westbourne (Kelly Thiebaud), which she’s told Robert has now in a suitcase chained to his wrist. But what Victor’s henchman, Gavin (uncredited actor) doesn’t know is that Robert has a fake-and Holly’s in on it, the real one having been removed from the safety deposit box.

The WSB already has it, with a trusted undercover agent not loyal to Victor having fooled the bank manager, who is loyal to Victor and Britt having given the key. Victor had long suspected that the necklace, originally made for Helena Cassadine (Constance Towers) but stolen by Leopold Taub (Chip Lucia) had been re-stolen by Cesar Faison (Anders Hove). Victor knew of Peter’s safety deposit box but until recently was not able to open it, since bankers don’t keep a master key.

General Hospital Spoilers – Two Can Play At That Game

Robert deduced that the necklace given Lucy Coe (Lynn Herring) by Victor had a bug built into it after talking to Anna Devane (Finola Hughes) previously. He decided two can play at that game and had a bug put into the fake Ice Princess necklace which is identical down to the real rubies and diamonds. There was something special about the Ice Princess diamond that when put into Mikkos Cassadine’s (John Colicos) weather machine they made it work – other diamonds won’t.

Everything Victor does when he has that duplicate Ice Princess necklace will be monitored and recorded. That is the secret plan to take Victor down, but when the diamonds don’t work Robert and Holly count on him getting mad and letting things slip.