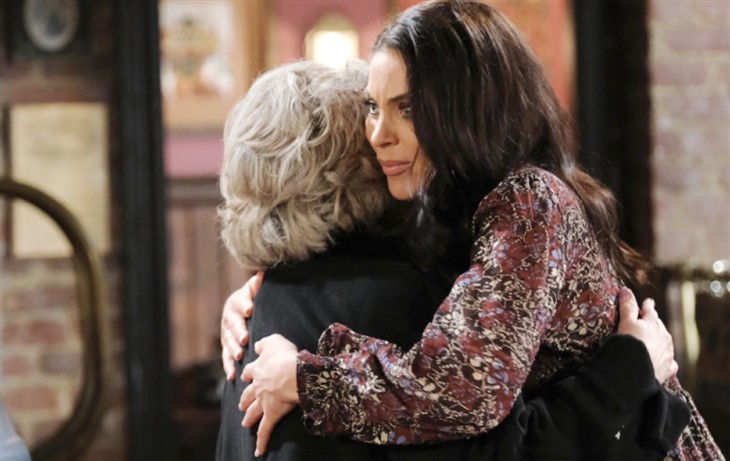 Days of Our Lives spoilers reveal that Nancy Wesley (Patrika Darbo) returns to Salem due to her failing marriage. Even though Nancy is having romantic problems, she will still have time to focus on her daughter’s love life. Nancy approaches Brady Black (Eric Martsolf) and encourages him to get back together with Chloe Lane (Nadia Bjorlin).

DOOL spoilers reveal that Nancy returned to Salem and lashed out at Chloe. Nancy was upset that Chloe hadn’t returned any of her phone calls. Chloe assumed her mother wanted to talk about Philip Kiriakis (Jay Kenneth Johnson). However, Chloe and Brady discovered that Nancy was frantic over the possibility of Craig Wesley (Kevin Spirtas) having an affair.

Nancy’s return won’t just be all about Craig, though. Nancy will get involved in Chloe’s love life. In fact, Nancy assumed that Brady and Chloe were living together until she was corrected.

During the week of January 24, Nancy will try to play Cupid. Wanting what is best for her daughter, Nancy seems to think that Brady is the man for her. Nancy will approach Brady about rekindling his romance with Chloe. Even though Brady did go after Chloe, it also resulted in him being arrested for a murder he didn’t commit.

Days of Our Lives spoilers reveal that the murder accusation isn’t the only reason why Brady is suddenly gun shy. Chloe is still grieving over Philip, who fans know really isn’t dead at all. Chloe is still very distressed over Philip’s disappearance. So, Brady might not think it’s the right time. However, Nancy will think that she knows best and in her mind, Brady and Chloe belong together.

It was teased several months ago that Brady and Chloe would eventually get back together. However, it was stated during a Zoom fan event with Martsolf and Bryan Dattilo (Lucas Horton) that Kristen DiMera (Stacy Haiduk) would be an obstacle.

Kristen is currently a fugitive and finds out from Steve “Patch” Johnson (Stephen Nichols) that he was hired by Brady. It is suggested that Kristen might end up escaping once again. Her next stop might be Salem, which means Chloe will once again be in danger. Could Nancy take part in making sure “Bhloe” reunite? Could that make her one of Kristen’s targets?

What do you think of Nancy pushing Brady to rekindle his romance with Chloe? Do you think it’s the right time, or should Chloe spend more time grieving? Could Kristen’s next stop be Salem and what does that mean for “Bhloe?” We will have to keep watching the NBC soap to find out.