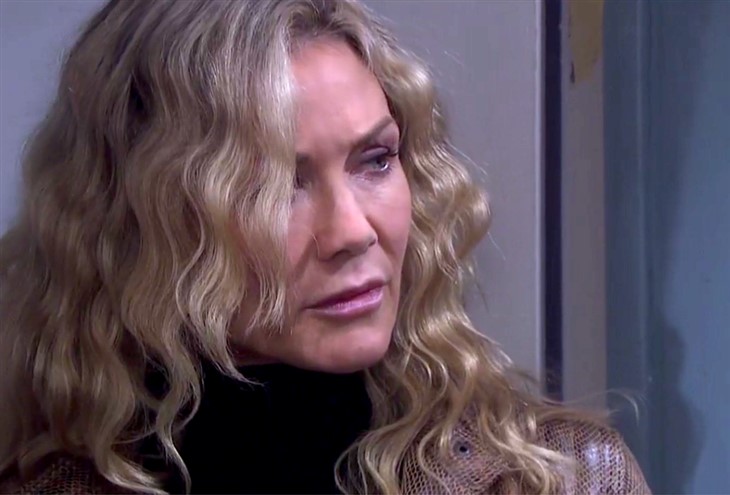 Days of Our Lives spoilers reveal that Kristen DiMera (Stacy Haiduk) surprises Steve “Patch” Johnson (Stephen Nichols). Kristen has a gun and will do anything not to go back to prison. During their conversation, Kristen makes a mistake. The fugitive mentions Steve being there for Sarah Horton (Linsey Godfrey). Could this explain Sarah’s sudden return to Salem?

Days Of Our Lives Spoilers – Kristen DiMera Armed and Dangerous

DOOL spoilers reveal that Steve warns Kayla Johnson (Mary Beth Evans) not to confront Kristen at the convent. Steve is allowing Kayla in the search for the fugitive, but doesn’t want her getting hurt. While Kayla searches the convent, Steve returns to the hotel. However, he is greeted by an armed Kristen DiMera upon walking into the hotel room.

Actress Stacy Haiduk interviewed with Soap Opera Digest about the upcoming scene. Kristen believes that Steve is in Italy to find Sarah. However, Steve has no idea that Sarah is even missing. Steve tells Kristen that he was hired by Brady Black (Eric Martsolf) to find her and bring her back to Salem.

When Kristen discovers that Steve will be escorting her back to prison, she feels like “a captured animal in a cage.” Kristen threatens Steve with the gun. The PI promises he won’t say a word about her being in Italy. Kristen knows this isn’t true and takes care of her problem. It isn’t clear what Kristen does, but Steve ends up on the floor and isn’t moving.

Days of Our Lives spoilers reveal that the fact that Kristen thought Steve was in Italy because of Sarah brings up some interesting theories. Kristen told Gwen Rizczech (Emily O’Brien) that Sarah was on a private island with no company but rats. The DiMera family owned an island at one time, so it was assumed this is where Sarah was being held hostage.

However, it seems that Kristen might be hiding Sarah at the convent. The hostage probably hasn’t been found due to Kristen drugging her. When Kayla searches the convent, she might find Sarah.

Another possibility is that Kayla finds Steve unconscious. Once Steve wakes up, he could tell her about Kristen mentioning Sarah. Even though Kristen might have escaped once again, “Stayla” could find Sarah before returning to Salem.

What happens when Steve and Kayla come back with the missing doctor? Will Kristen ever be captured and held accountable for her crimes? Tell us what you think will happen and remember to keep watching the NBC soap to see what happens next.