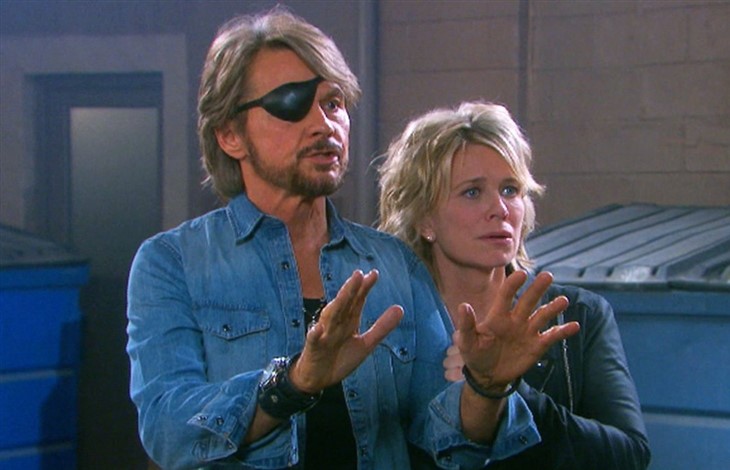 Days of Our Lives (DOOL) spoilers reveal that Kristen DiMera (Stacy Haiduk) pulls a gun on Steve “Patch” Johnson (Stephen Nichols). Steve ends up lying motionless on the ground, but it’s not clear if he’s shot or knocked out. What is known is that Kristen will impersonate Steve via text. However, will Kayla Johnson (Mary Beth Evans) sense something isn’t right?

DOOL spoilers reveal that Kristen is determined not to get caught and return to prison. When Kristen saw Kayla and Steve at the convent, she knew they were looking for her. Kristen asked Mother Superior (Ellen Crawford) to use her phone.

We don’t know who Kristen called, but Haiduk spoke to Soap Opera Digest about what will happen next. The actress explained that Kristen is a desperate woman. Desperate people do desperate things, as Kristen does during the week of January 17.

Meanwhile, Steve goes back to his hotel room. However, when he walks in, Steve is shocked to see Kristen. Not only does Kristen catch Steve off guard, but she is also pointing a gun at him. Steve tries to convince Kristen that he’ll return to the states and nobody will know anything about her. However, Kristen knows Steve isn’t being honest.

“She threatens him because she’s not going to be taken back to Salem and put back in prison. So she ends up taking care of him… We don’t know what’s happened to him, if he’s dead or alive.”

Days Of Our Lives Spoilers – Impersonation via Text Message

Days of Our Lives spoilers reveal that Steve isn’t Kristen’s only problem. Now she has to deal with Kayla. Right on cue, Kayla sends Steve a text message. Based on Haiduk’s statement to SOD, it sounds as if Kristen pretends she’s Steve when replying to Kayla’s text message.

“But it’s Kristen who picks up the text. She lets Kayla know he’s just fine.”

Kayla is a smart cookie and probably won’t fall for Kristen’s trickery. Remember, Kayla recently was tricked by Marlena Evans aka “MarDevil” (Deidre Hall). Kayla thought she was kissing Steve when it was actually the devil. That is probably still fresh in her mind.

With Kayla knowing all about Kristen’s masks, she might get the feeling that something isn’t right. Another possibility is that Kristen does a poor job of sounding like Steve via text message. So, Kayla could head back to the hotel and blindside Kristen, thus saving Steve’s life. If this happens, though, does Kristen get captured or will she get away once again?

GH Spoilers: A Leading Man Thinks His Pairing Is The New Luke And Laura?