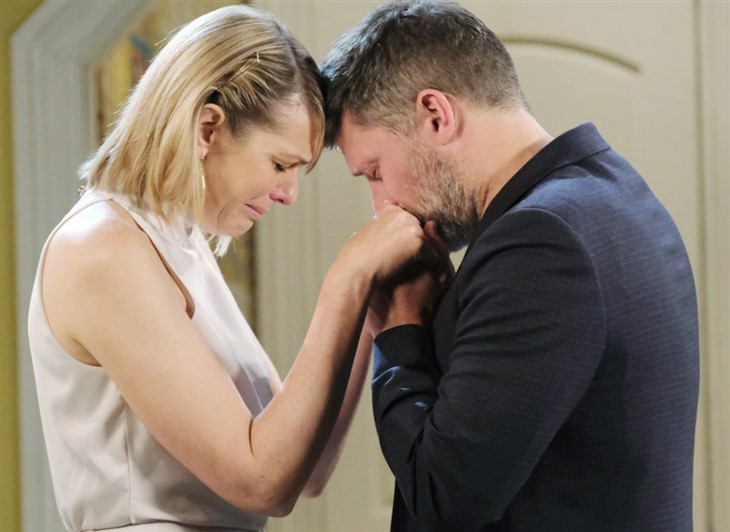 Days of Our Lives spoilers reveal Eric continuing to brood around town and behind the bar at The Brady Pub because nobody ever taught him how to be a husband.

Days Of Our Lives’ Spoilers – Eric Brady Did A Dumb Thing

After waiting more than two decades to wed, one would think that Eric Brady (Greg Vaughan( might want to stick around town and be with his wife while they were at least in the honeymoon stage. Instead, he left to do humanitarian work in Africa, leaving Nicole Walker (Arianne Zucker)alone and devastated.

Sure, he called and sure, he said he was coming home every once in a while, but he kept canceling. That doesn’t mean she should have had that drunken one-night stand with Xander Cook (Paul Telfer), but we can certainly understand how she got there.

Even when Eric returned for their first anniversary, it was only brief, the truth came out, and he left again. Now, Eric is back in Salem and Nicole up and married Rafe Hernandez (Galen Gering) on while — off screen, thank goodness, because who needed to see that?

Vaughan and Walker have always had amazing chemistry and we’re not sure why this soap gets other pairs together so easily, but can never seem to give Eric and Nicole even a little semblance of happiness. The longest they have ever been together without strife happened off-screen when DAYS time hopped to November of 2020 but somehow didn’t predict COVID.

No, we are forced to watch Nicole married to a man she seemed to fall over over a dumb Teddy bear they won at the fair. And Eric gets to stand longingly at Nicole and not tell her how he feels.

This mess was Eric’s fail to begin with and he is failing again because we know if Nicole had any idea he really felt, she never would have married Rafe. When a couple has this much chemistry and has been on and off for this long, that means they are typically endgame, so can we get there already? Stay tuned to Days of Our Lives weekdays to see how this story plays out.