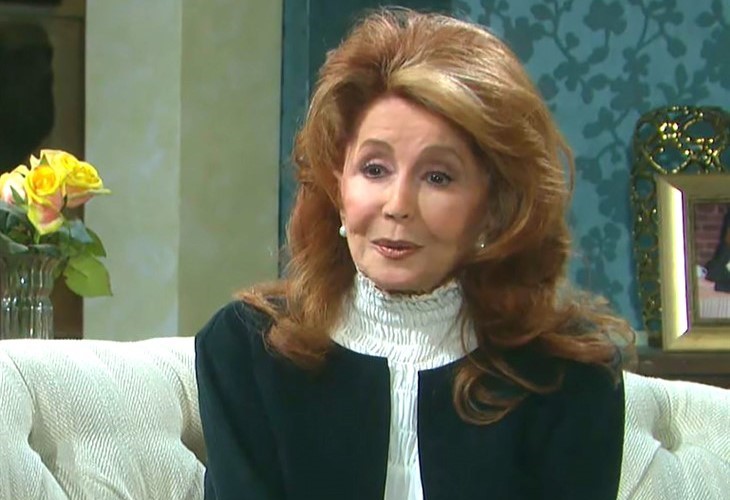 DOOL spoilers reveal that Sarah has finally been found and brought back to Salem. Unfortunately, Sarah still doesn’t understand that she’s suffering from a delusion. Even though multiple people have called her Sarah, the Salemite is convinced that her name is Renee DuMonde.

In addition to that, Sarah thinks her true love is Tony DiMera (Thaao Penghlis) and wants Anna gone. At one time many years ago, Tony and Anna were expecting a baby. Unfortunately, Renee put a hole in a boat unaware that Anna wouldn’t be alone on it. Tony and Anna both escaped with their lives, but their unborn child didn’t make it.

Sarah has already demanded that Tony divorce Anna. Tony isn’t sure what to do about this situation. Tony is committed to Anna, but he knows just how dangerous people with mental illnesses can be. With the real Renee nearly killing Anna before, Tony worries that Sarah could take drastic action to eliminate her competition.

Days of Our Lives spoilers reveal that Xander has already tried to trigger Sarah’s memories. Xander showed Sarah photos of them smiling together. However, none of it jogged the doctor’s memories. In fact, Sarah became more agitated by the minute. It sounds as if that is going to continue.

During the week of March 14, Xander wants Sarah to be committed to Bayview psychiatric hospital. However, he can’t have Sarah committed to Bayview as they are not married. Xander turns to Maggie and expects she will sign the papers to get her daughter back. It is confirmed that Maggie won’t do it, though.

Most likely, Maggie feels that Sarah has been through enough. Maggie can’t bring herself to put Sarah in another “hostage” situation. Maggie is holding onto hope that Sarah will snap out of it.

However, Anna’s life is in danger and Xander is desperate for Sarah to get her memories back. This could lead Xander to take drastic action, perhaps even forging Maggie’s signature on the commitment papers. Will Sarah do the unthinkable to Anna before Xander can take action, though? We will have to keep watching the NBC soap to see what happens next.