Days Of Our Lives Spoilers: Johnny Fights To Rid Himself Of The Devil 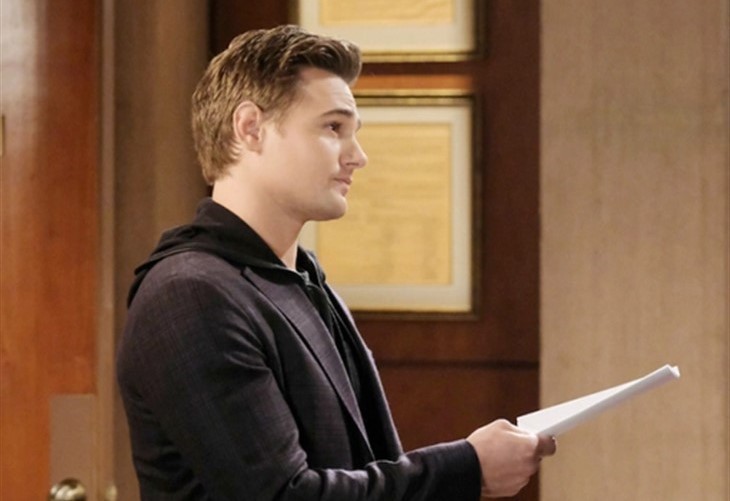 Days of Our Lives spoilers and updates tease that Johnny DiMera (Carson Boatman) will fight to rid himself of the devil in an upcoming episode of Days of Our Lives; it looks like he will realize it’s satan and not himself who’s really in control!

Days of Our Lives viewers will recall that the devil’s had a good run in Johnny, as Johnny DiDevil has wreaked havoc and destroyed a lot of relationships in Salem! The devil has appeared to have a lot more strength in Johnny than if possible, than he ever had in Marlena Evans (Deidre Hall)! But then Johnny hasn’t tried to fight satan within himself the way his grandmother always did; he’s just pretty much gone along with the fiery flow, where ever the devil wanted to go!

It appears that the devil wants to totally take Johnny over during the DiMera board meeting, or close to it, when Johnny gets a sense of his real self and realizes what has happened – and tries to rid himself of satan! Viewers will recall that when the devil first entered Johnny, he felt ill – very ill to his stomach; and it looks like he has a bout of stomach distress in the DiMera mansion as well!

DOOL Spoilers – The Devil Isn’t Leaving Without A Fight!

The devil isn’t just leaving Johnny without a fight – he’s right at the top of the staircase when he suddenly doubles over and grabs the right lower side of his stomach! Days of Our Lives viewers know there’s a chance that it’s his appendix that needs to be exorcised as well, if he still has it, since that is the area where his appendix should be.

But perhaps Johnny has been arguing with his unwelcome tenant over something and satan doesn’t like it, so instead of stabbing someone else with his fiery darts he shoots Johnny a zinger to keep him under control! At the board meeting, perhaps real Johnny wakes up momentarily as Gabi Hernandez (Camila Banus) is installing herself as DiMera CEO and him as co-CEO and he wonders where his father is! The devil likes it where he is and he doesn’t want to leave just yet!

Days of Our Lives viewers know that the devil revealing himself in whatever host he is living in at the time isn’t something new, just last Christmas MarDevil burned up the Horton tree topper as she held a pair of torches! Days of Our Lives viewers will also recall that demonic temper tantrum as MarDevil literally threw Shawn Brady (Brandon Beemer) across the table and into the wall, exhibiting superhuman strength for a female body!

Now, Johnny loses the war against his unwelcome tenant who is already causing too much trouble and he goes full blown Satan, as he focuses his yellow eyes on Jake DiMera (Brandon Barash) who has arrived at the board meeting! Satan is going to lose Johnny his job at DiMera when he makes it plain that the devil is in charge, not Johnny, and he IS the devil!