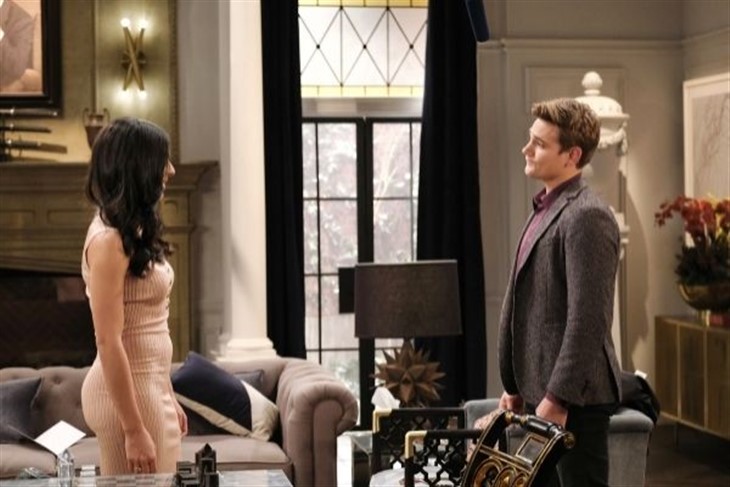 Days of Our Lives spoilers reveal that Gabi Hernandez (Camila Banus) and Johnny DiMera (Carson Boatman) put their plan into action. At the DiMera shareholder meeting, Gabi not only suggests she be the CEO instead of Jake DiMera (Brandon Barash), she doesn’t put Victor Kiriakis (John Aniston) on the board. Instead, she suggests Johnny. What will the board decide?

DOOL spoilers reveal that Johnny aka “JoDevil” has driven a wedge in Gabi’s relationship. Even though Jake didn’t betray or deceive Gabi, she thinks otherwise. That’s due to the devil whispering in Gabi’s ear and even going to the point of impersonating Jake during a meeting with Maggie Horton Kiriakis (Suzanne Rogers).

During the week of March 7, Gabi and Jake will attend the DiMera shareholder meeting. A decision is going to be made on who will be the CEO of DiMera Enterprises moving forward. Kate Roberts (Lauren Koslow) backs Chad DiMera (Billy Flynn). Meanwhile, Jake thinks that Gabi is going to vote for him while Victor expects to be added to the board.

Jake knew that Johnny was a problem, but had no idea that it wasn’t just about getting Gabi into bed. Despite the weird and distant way Gabi has been acting, Jake has no clue that he’s being deceived. At the meeting, Gabi announces that she wants to be appointed CEO. This is a shocker to Jake, who thought they were on the same page.

Days of Our Lives spoilers reveal that Gabi deceiving Jake at the meeting isn’t the only bombshell. Jake and Gabi made a deal with Victor and Maggie. Instead of Gabi appointing Victor to the board of DiMera Enterprises, she picks Johnny. This is not what Victor, Maggie or Jake expected at all.

Victor will recover as he never really trusted Gabi to begin with. Victor and Maggie weren’t sure if “Jabriella” could get enough votes, though. So, the Kiraikis couple is really surprised when they learn what Gabi has done.

According to Soap Opera Digest, the board makes a shocking decision. Gabi ends up being named as the new CEO of DiMera Enterprises and Johnny is appointed to the board. Jake’s head is spinning as he doesn’t understand why Gabi has done this.

In the end, Jake and Gabi’s relationship won’t survive. Not only do the two break up but Johnny exposes himself as the devil to Jake. Afterward, “JoDevil” knocks Jake unconscious and erases his memory. When Jake wakes up, Johnny claims that he was viciously attacked by Jake.

Fans know that the devil won’t be in control forever. At some point, the devil will be vanquished from Johnny’s body as well as Salem. However, will there be too much damage done for Jake and Gabi to get back what they had together?