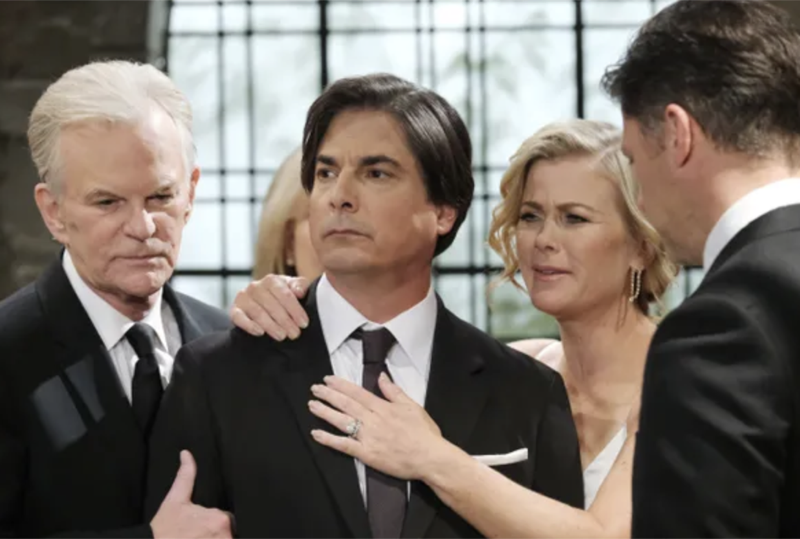 Days of Our Lives spoilers reveal that Marlena Evans (Deidre Hall) hypnotizes Lucas Horton (Bryan Dattilo). Although Lucas does have a “total recall,” it might not be as simple as everyone thinks. Lucas remembers who fled out the door after Abigail DiMera (formerly Marci Miller) screamed. However, it just might lead to another wrong arrest.

DOOL spoilers reveal that ever since Abigail’s murder, Lucas has been reeling. Lucas doesn’t know if he was responsible due to his alcohol-induced blackout. Even though Lucas knows in his heart that he didn’t kill Abigail, his head tells him that it’s possible.

After Lucas’ arrest, JJ Deveraux (Casey Moss) threatens to beat the memories out of him. The assault is stopped when Jennifer Horton (Cady McClain) walks in. Despite the suspect’s blackout, motive, opportunity, and Chad DiMera’s (Billy Flynn) accusation, Jennifer knows that Lucas is innocent.

Even though Jennifer’s belief in Lucas’ innocence gives him some relief, he is still distraught over the possibility that he could have murdered his niece.

After Kate Roberts (Lauren Koslow) asks Marlena for help, the psychiatrist shows up to hypnotize Lucas. At first, Lucas is hesitant but ends up agreeing because he wants answers just as much as everyone else.

Days of Our Lives spoilers for the week of July 18 reveal that Marlena helps unlock Lucas’ memories from that fateful night. Lucas remembers being inside the DiMera mansion. At the bottom of the stairs, Lucas hears Abigail scream and someone running to the first floor. Lucas hides but can see someone flying out the front door.

The weekly preview suggests that Lucas saw who ran out the door after Abigail’s murder. However, it is likely that who Lucas saw wasn’t the killer but the person who stole Abigail’s jewelry. As fans know, that person is none other than Leo Stark (Greg Rikaart).

Days of Our Lives Spoilers: Another Wrong Arrest

“Lucas recalls what truly happened that night. It’s kind of cool to get the realizations, finally.”

However, it was teased in the interview that Lucas’ memories will bring more questions than answers. So, it sounds like Leo will be the next person arrested for Abigail’s murder. Since Rikaart is sticking around a while, he is probably not the killer. So, if Leo didn’t commit murder, then can he explain who did?

What do you think is going to happen when Lucas’ memories are unlocked? Will Leo be arrested next and if so, did he witness the murder? Who is the person who really killed Abigail? Share your thoughts and remember to keep watching the NBC soap to see what happens next.