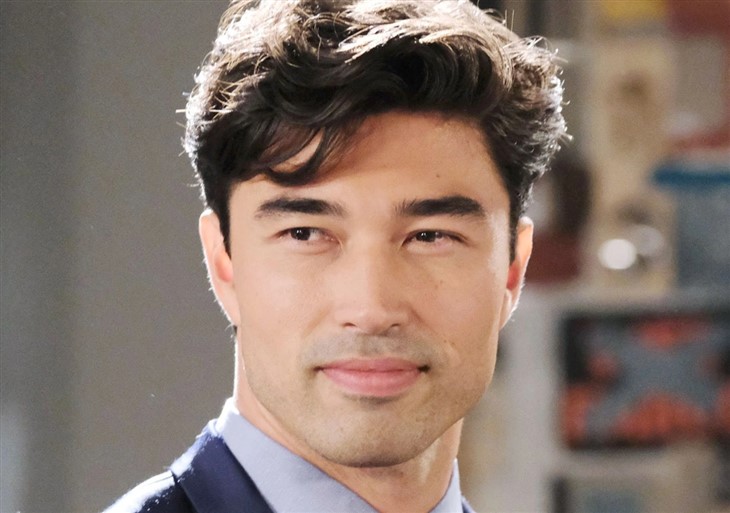 Days of Our Lives spoilers reveal that Li Shin (Remington Hoffman) has always been painted as a rule follower and serious businessman. However, fans are seeing Li in a new light. There are clues that Li isn’t just hiding secrets but could actually be dangerous. Could Li even be a killer hiding in plain sight? Keep reading to find out more information.

DOOL spoilers reveal that fans saw very little of Li before he got involved with Gabi Hernandez (Camila Banus). Li was only seen when he had a decision to make about the never-ending rotation of CEOs at DiMera Enterprises. Fans did see in the web companion series “Chad & Abby in Paris” that Li had zero tolerance for harassment in the workplace.

However, fans are starting to see Li in a new light and it’s not good. Let’s go over the clues that Li is not the great guy that he pretends to be.

The first sign was when Gabi overheard Li telling someone on the phone that he loved them. Gabi accused Li of speaking with another woman. Li claimed that the woman on the phone was his mother. Then, Li suggested they call his mother back so Gabi could check. Of course, Li said this knowing that Gabi would simply accept his answer.

There was also the recent scene in which Li met Gabi’s brother, Rafe Hernandez (Galen Gering). Li was polite enough but there was something in his face that suggested he didn’t like Rafe barging in.

General Hospital spoilers reveal that Li also threatened Dr. Wilhelm Rolf (Richard Wharton). When Dr. Rolf admitted being terrified of Kristen DiMera (Stacy Haiduk), Li suggested he was far scarier if his orders weren’t obeyed. There was something in Li’s face and eyes that suggested he wasn’t bluffing.

Later, Li went to Gabi and asked if she knew how to follow orders. At first, Gabi was stunned but he covered by claiming he wanted her back in bed. However, it was clear that Li meant something else entirely. Gabi could be in a dangerous situation and not even realize it.

It is teased that Abigail DiMera’s (formerly played by Marci Miller) killer will be someone unexpected. Could it be possible that Li killed Abigail when she learned the truth about him?

Li also has access to Dr. Rolf’s technology, so throwing on a mask isn’t that far-fetched. Of course, Li might have just lucked out when someone impersonated Sarah Horton (Linsey Godfrey) the night Abigail died. Abigail isn’t a woman whose silence can be bought.

So, if Abigail was going to expose Li, he might have killed her. Who knows, maybe Li has killed before. If that’s the case, then Stefan DiMera’s (Brandon Barash) resurrection might save Gabi’s life.