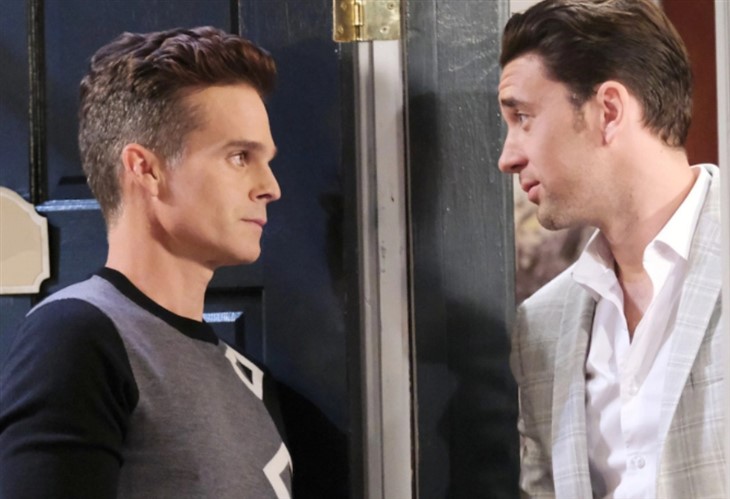 Days of Our Lives (DOOL) spoilers for Friday, August 12, 2022, reveal Chad reaching the last straw when it comes to Leo because he is sure this man killed his wife.

Chad DiMera (Billy Flynn) has suspected Leo Stark (Greg Rikaart) from the start. As soon as Abigail DiMera (Marci Miller) turned bloodied and stabbed in her bedroom, Chad felt Leo was the one who did it. He was pleased when Leo was the first person that Rafe Hernandez (Galen Gering) hauled in for questioning and was outraged when Rafe let him go because he thought he had another suspect.

Now Thomas is able to confirm that Leo was in the DiMera tunnels that night, which places him in close proximity to the scene of the crime. Of course, Leo denies everything and insists he is not a murderer but that doesn’t mean

Nicole Walker (Arianne Zucker) was quite shaken up when she saw Eric Brady (Greg Vaughan) and Jada Hunter (Elia Cantu) getting along so well together. She knows she is newly married, but those old feelings for Eric are still there and she can’t stand the idea of seeing him with someone else.

But Nicole also has other problems because her new husband Rafe can see exactly what she is feeling and wonders if there might be problems in his marriage already. Perhaps he should have thought of that when he married Nicole. It was clear she wasn’t over Eric, a man she longed for continuously for two decades. Rafe should have known better than to ever marry her.

Ever since Alexander Kiriakis (Robert Scott Wilson) returned to Salem, a place he hasn’t been since he was a baby, he has butt heads with his younger brother, Sonny Kiriakis (Zach Tinker). On Friday, the two brothers sit down to hash out their problems so they can forge ahead with their personal and professional lives. After all, they are going to start working together so they better start getting along.

Will Justin Kiriakis (Wally Kurth) and Adrienne Kirkiakis’ (Judi Evans) sons be able to work out their differences or will this be an ongoing war? Stay tuned to Days of Our Lives weekdays to see how these stories play out.