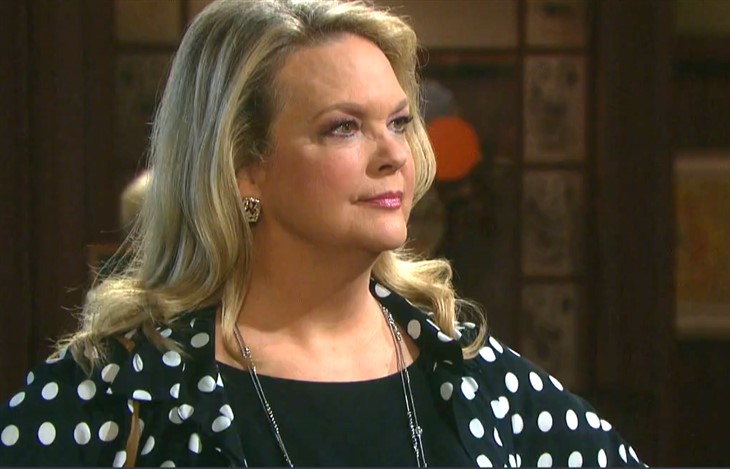 Days of Our Lives spoilers for the week of August 15 reveal that Anna DiMera (Leann Hunley) gets suspicious of Kristen DiMera (Stacy Haiduk). It would be just like Anna to spy on Kristen and see where she keeps running off to. That could lead Anna to Dr. Wilhelm Rolf’s (Richard Wharton) lab. Will Anna find Stefan DiMera (Brandon Barash) and could she get caught?

DOOL spoilers reveal that Kristen hoped that Dr. Rolf could bring Jake DiMera (also played by Barash) back to life. However, Dr. Rolf said that there was no hope for Jake as he was brain-dead. That is when Kristen learned that for the past three years, Dr. Rolf had secretly kept Stefan alive.

Despite Stefan’s heart being donated, Dr. Rolf managed to keep him alive using artificial means. Then, Dr. Rolf realized that he could take Jake’s heart and implant it in Stefan since they are identical twins.

Kristen will pressure Dr. Rolf to wake Stefan up sooner rather than later. Dr. Rolf tells Kristen that this isn’t a good idea and they need to be patient. However, Kristen will probably get her way, which could mean Stefan won’t be completely whole or “right” when he is resurrected.

With Kristen constantly running off to the lab, it’s only a matter of time before someone notices. During the week of August 15, Anna gets suspicious. This could lead Anna to secretly follow Kristen.

Anna could come across Stefan on the brink of waking up. Of course, Anna might think it’s Jake at first, but will probably realize the truth soon enough. Just imagine if the first person Stefan sees upon wakening is Anna. When Anna says “Jake,” Stefan might correct her.

Once Anna realizes that Dr. Rolf and Kristen are resurrecting Stefan, she will be stunned. However, Anna might have to rush to get out of there if she hears someone coming. With it being teased that Li Shin (Remington Hoffman) is involved in this scheme, Anna better not get caught.

This storyline is teased to get even more complicated as time goes on. So, keep watching the NBC soap to find out what happens next.