Days Of Our Lives Spoilers: Lani Takes Comfort From The Wrong Dad 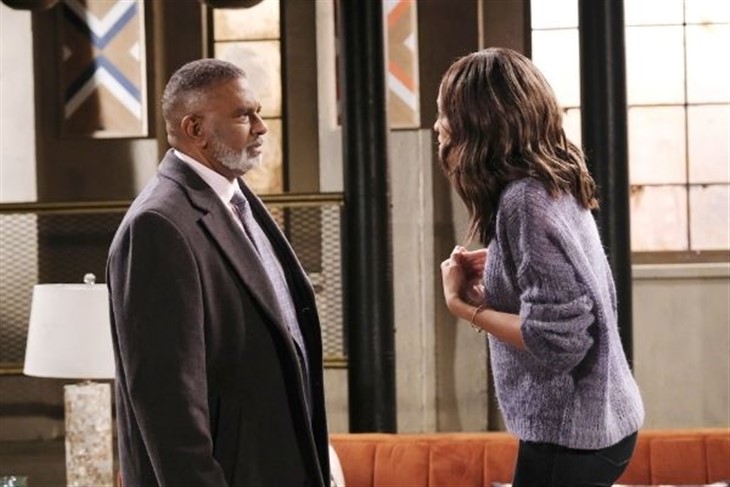 Days of Our Lives (DOOL) spoilers for Wednesday, March 30, 2022, reveal Lani fearing she may lose Eli and turning to the exact wrong man for comfort.

Days Of Our Lives Spoilers – Lani Price In Trouble

Poor Lani Grant (Sal Stowers) is completely in the dark about who her real father really is. She now knows his name is TR Coates (William Christian) and he seems nice but looks and attitudes can be deceiving. Not even her cop sixth sense is telling her there is something very, very off with this man. However, he is there for her and she needs all the support she can get so she takes what she can.

She just doesn’t realize the man giving her comfort as a newfound dad is the same one who put Eli Grant in his precarious position in which he might die. Where is Abe Carver (James Reynolds)? Shouldn’t he be comforting Lani and shouldn’t he use his own cop sixth sense that is more developed than Lani’s to figure out what is really going on. He is also the mayor. Falling down the job, Abe?

Brady Black (Eric Martsolf) and Chloe Lane (Nadia Bjorlin) have now found their way back to closeness like they haven’t in years, but they also have a mission to work on. They still want to get Craig Wesley (Kevin Spirtas) to see the light about Leo Stark (Greg Rikaart), but things don’t work out quite as planned. Leo informs Brady and Chloe that in the end, he did not cheat on Craig. (Although it was quite tempting because Chad puts on quite an act.)

Trouble for Roman Brady (Josh Taylor) and Marlena Evans (Deidre Hall). Roman doesn’t know quite what to say when Clyde Weston (James Read) stops by the pub looking for a job. He claims he plans to be on the straight and narrow this time, so waiting tables or cooking food is fine by him.

Marlena also receives a surprise visitor and she knows it is someone she can’t trust. Does it have anything to do with Satan? After all, they are quite well acquainted. Stay tuned to Days of Our Lives weekdays to see how these stories play out.