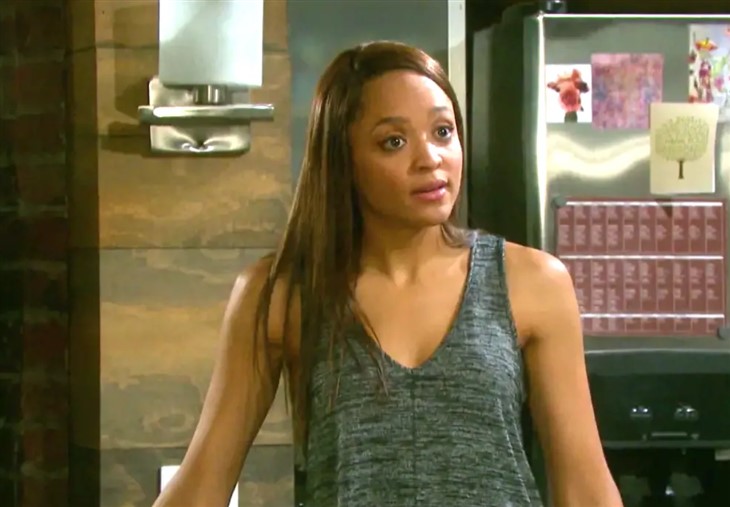 Days of Our Lives (DOOL) spoilers reveal that Paulina Price (Jackee Harry) and Lani Price-Grant (Sal Stowers) keep their secret. However, Abe Carver (James Reynolds) starts his own investigation after getting intel from Steve “Patch” Johnson (Stephen Nichols). Next week, Lani’s guilt over the shooting will become too much for her to bear.

DOOL spoilers reveal that Lani shot and killed TR Coates (William Christian). Even though Lani didn’t follow police procedure, she would be unlikely sentenced to prison. It’s true that TR was unarmed but he was about to beat up Paulina. Plus, by the time Lani burst through the door, Abe was lying motionless on the floor in a pool of blood.

Lani probably would be suspended from the police force or even lose her job. However, prison would be quite a stretch considering the circumstances.

Even so, Paulina took it on herself to protect Lani by confessing to the crime. Of course, the police are investigating and collecting evidence. So, the truth won’t match up to Paulina’s story.

The investigation isn’t even completed yet, but Paulina’s story is already falling apart. Steve immediately noticed that the gun on the floor appeared to be the same one issued by the police department. When Steve mentioned this to the police officer, he agreed with the observation.

Steve will bring this up to Abe, which makes the mayor wonder what really happened the day of the shooting. Abe will want to get to the truth and could question both Paulina and Lani about it. However, it is teased that the women will stick to their story.

Days of Our Lives spoilers reveal that Lani’s guilt will intensify. Lani knows that she needs to come forward with the truth. Paulina has been arrested for the crime and could go to prison. Lani might even tell Paulina that they should tell the truth. However, Paulina will probably pressure Lani to keep up the ruse.

While Paulina does have good intentions, lies and secrets only make things worse. During the week of May 23, Lani’s guilt becomes overwhelming. It sounds like the only way the truth will come out is when Lani completely spirals.

When everyone learns what really happened, what does that mean for Lani’s future? Will the truth come out before Paulina loses her freedom? How will Abe and Eli Grant (Lamon Archey) feel about being lied to? Share your thoughts and remember to keep watching the NBC soap to see how this story ends.