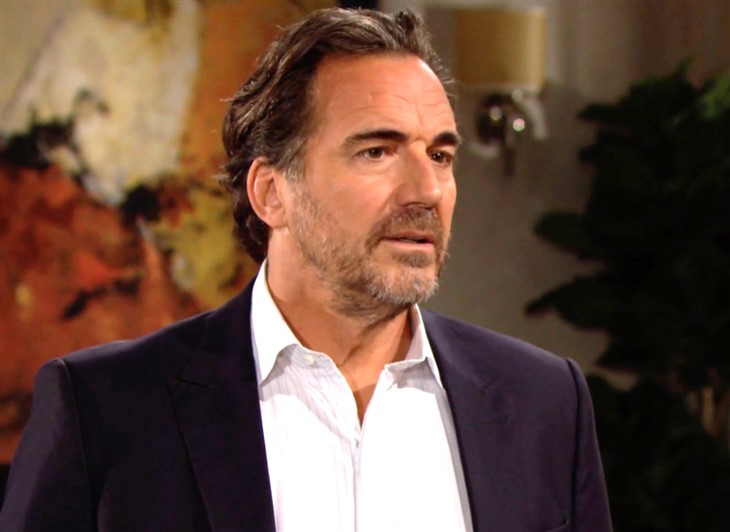 The Bold and the Beautiful (B&B) spoilers reveal that Ridge Forrester (Thorsten Kaye) is torn. Until he decides between Taylor Hayes (Krista Allen) and Brooke Logan Forrester (Katherine Kelly Lang), Ridge will stay with Eric Forrester (John McCook). That means he will probably find out about Eric and Donna Logan’s (Jennifer Gareis) affair. Will Ridge keep his father’s secret?

The Bold And The Beautiful Spoilers – Ridge Forrester’s Move

Ridge ran to tell Brooke about the bombshell discovery. Then, Brooke asked Ridge to come home. However, Ridge said he needed more time. In reality, Ridge’s heart is torn between Brooke and Taylor. That is what led to Ridge deciding to move in with Eric until he can choose which woman he wants.

Meanwhile, Eric has his own love triangle going on. Eric is still married to Quinn Forrester (Rena Sofer). While Quinn is determined to stay faithful, Eric is rushing off to hop into bed with Donna. Quinn doesn’t know about the affair yet, but she will soon enough.

As for Eric not leaving Quinn for Donna, the Forrester family patriarch simply can’t make up his mind yet. Eric feels happy with Donna. However, Eric also can’t get Quinn out of his mind.

The Bold And The Beautiful Spoilers – Finding Out About Donna Logan

The Bold and the Beautiful spoilers reveal that when Ridge moves in with “Queric,” he could discover some secrets. One of those secrets just might be Eric and Donna’s affair. Ridge might not agree with Eric stringing both women along.

However, he’s never liked or trusted Quinn. Ridge was especially furious with Quinn after finding out about Carter Walton (Lawrence Saint-Victor).

Eric might open up to Ridge about why he is still with Quinn but running off to be with Donna. Ridge has a similar situation going on with Taylor and Brooke. So, Ridge might understand Eric not wanting Quinn to find out the truth yet. Considering everything Quinn has done to Eric and “Bridge,” Ridge just might push his father to get a divorce.

Of course, Eric has no problem with Taylor but feels strongly that “Bridge” is “destiny.” Will Ridge find out about Eric’s affair? If so, how long will Ridge keep his father’s dirty little secret? Share your thoughts and remember to keep watching the CBS soap to see what happens next.