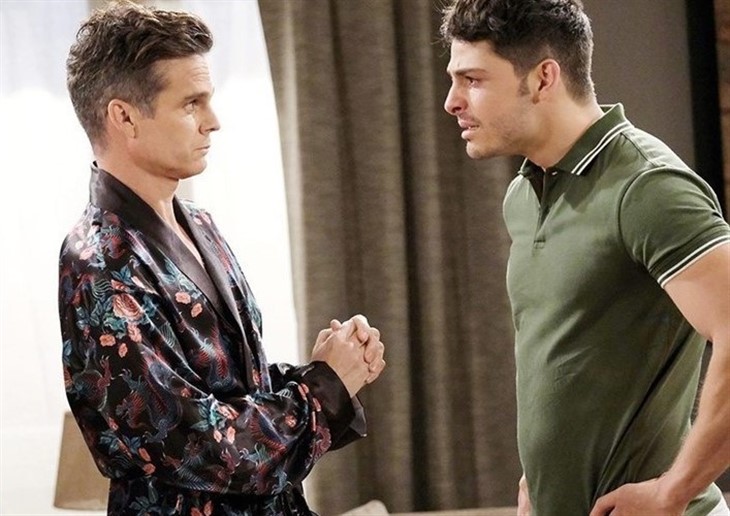 Days of Our Lives spoilers reveal that Leo Stark (Greg Rikaart) continues to get his revenge. This time, Leo targets Sonny Kiriakis (Zach Tinker). Sonny wakes up in the morning and tries to figure out what happened the night before. It sounds like Leo might drug Sonny and sleep with him. If he goes that far, he’ll probably record the night of passion.

DOOL spoilers reveal that Leo was exposed at his wedding to Craig Wesley (Kevin Spirtas). Even though Leo claimed that he truly fell in love, Craig admitted that he would never be able to trust him again. The two have gone their separate ways but Leo is determined to make his enemies pay.

Leo already went to Gwen Rizczech (Emily O’Brien) once asking for her help getting revenge. However, Gwen wasn’t able to do anything due to her arrest. It seems that Gwen might find a way out of her predicament, though. Next week, Leo goes to Gwen once again to ask for her help with a vengeful scheme.

After Craig left Salem, Leo put his first plan to get revenge in motion. That included having an article written about Chad DiMera (Billy Flynn). The article infuriated Chad but Sonny assured him that the article could have been a lot worse. Sonny might have not thought much of Leo’s revenge on Chad. However, Sonny is the next person on Leo’s list.

Days Of Our Lives Spoilers – Leo Stark Just Getting Started

Days of Our Lives spoilers reveal that Leo is just getting started in making people pay for his ruined wedding. Chad was first and Sonny will be next. However, Leo also has it in for Abigail DiMera (Marci Miller), Will Horton (Chandler Massey), Brady Black (Eric Martsolf), and Chloe Lane (Nadia Bjorlin).

Leo and Nancy Miller (Patrika Darbo) also have another confrontation. So, Nancy might find herself on Leo’s revenge list as well.

During the week of May 23, Sonny tries to figure out what happened the night before. Leo is also mentioned in the weekly spoilers. That is when Leo goes to Gwen asking for her help with a plan. So, it sounds like Sonny might have a blackout. That is pretty dangerous, especially when Leo is involved.

It is suggested that Leo might drug Sonny or perhaps the Kiriakis heir gets drunk. The two might have a night of passion but knowing Leo, he will record it and use it to his advantage.

Considering Sonny just accepted Victor Kiriakis’ (John Aniston) job offer, any bad publicity wouldn’t look good for Titan Industries. Just how far is Leo going to go, and what will Will think once he learns about Sonny’s drunken night of passion?