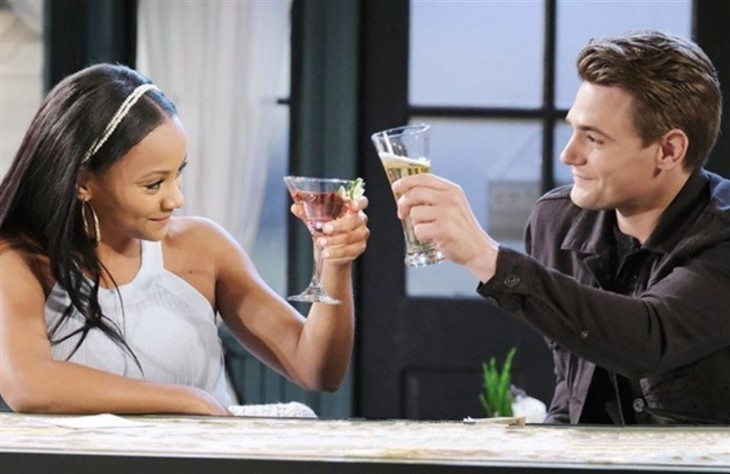 Days of Our Lives spoilers and updates tease that Chanel Dupree (Raven Bowens) will be torn over Johnny DiMera’s (Carson Boatman) remarriage proposal in a future DOOL episode.

Days Of Our Lives Spoilers –The Devil Made Him Do It

With everything that Chanel has seen with Allie Horton (Lindsay Arnold) and others go through over the last few months in Salem, she now understands Johnny didn’t dump her. In a very true sense, the devil made him do it just like the devil made Allie quit their Sweet Bits bakery and kidnap baby Bo Weston (uncredited infant)! Soon, Johnny will try to prove to Chanel exactly how much he still loves her, and also how much he wants her back, even risking trying too hard!

If it weren’t for the devil possessing Johnny, he and Chanel would still be married and acting like the honeymooners they would have been. Johnny very much wants a new start with Chanel, and he’ll even offer a grand gesture remarriage proposal!

DOOL Spoilers – A Lot Has Changed

Admittedly, a lot has changed since the devil took over Johnny, and it may not just be things around town in Salem that have changed!  Although Johnny’s love for Chanel hasn’t changed between pre-devil possession and post-devil possession, Chanel herself may have changed quite a bit, for one thing she moved on with Allie! Of course that also came to an end thanks again to satan and his possession of Allie, with Chanel getting her heart broken again! But again, she understands that the devil made her do it too and it wasn’t really Allie behind these hurtful actions, she literally wasn’t herself either just like Johnny! But Chanel may not just totally jump at the chance for a start over with a remarriage; she might be okay with just dating a while, since they married impulsively.

Days Of Our Lives Spoilers – Torn Between Two Former Lovers

It’s plain that back-from-the-dead Tripp Johnson (Lucas Adams) still loves Allie, he gave his life – for a few minutes – to save her soul! From the minute he came to on the ground till he came to life on the examining table Allie was all he talked about! Allie cried tears of joy when John Black (Drake Hogestyn) came back and told the miraculous news that he was alive and would be fine!

Although this seems to be an extremely remote possibility, viewers will recall that Tripp and Chanel were almost a thing after Johnny DiDevil broke Tripp and Allie up! Then AllieDevil dumped Chanel and Tripp had apologized to her about telling her off – they spent a night together but nothing happened. They decided they’d be better just being friends. But, there is a possibility those two could bond and Johnny and Allie be out in the cold! Regardless, when Johnny proposes remarriage to Chanel, she’ll be torn!