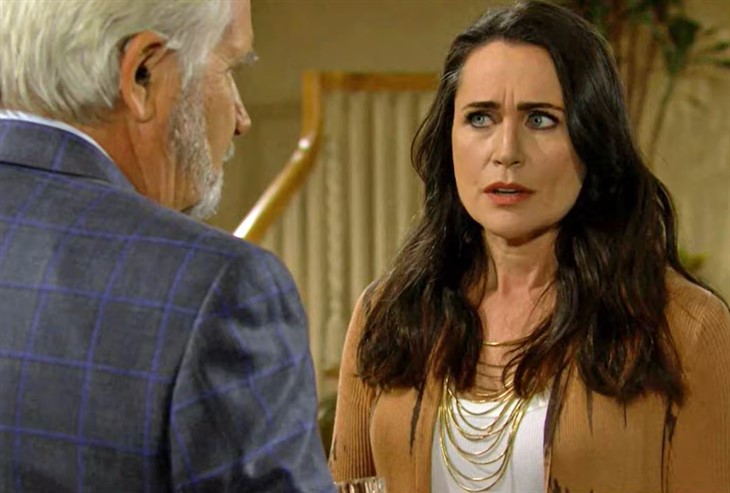 The Bold and the Beautiful (B&B) spoilers reveal that Quinn Forrester (Rena Sofer) is determined to stay faithful to her husband. However, Quinn doesn’t realize that Eric Forrester (John McCook) is having an affair with Donna Logan (Jennifer Gareis). At some point, Eric and Donna will get caught. Could it happen when Quinn tries to plan a romantic surprise for Eric?

The Bold And The Beautiful Spoilers – Quinn Forrester’s Admission

B&B spoilers reveal that Eric was recently asked how his marriage was going since everything went down. Eric just said “fine” and changed the subject. More recently, Quinn and Carter Walton (Lawrence Saint-Victor) reconnected. Carter asked Quinn about her marriage. Quinn admitted that Eric is sleeping in the guesthouse. So, the bedroom problems continue.

Even though Quinn admitted to still having feelings for Carter. Quinn also said that Carter showed her what she’s worth. Quinn added that Carter is one of the only people she can be completely herself around. However, Quinn is determined to be faithful to Eric this time around.

What Quinn doesn’t realize is why Eric keeps rushing off and is sleeping in the guesthouse. Eric is cheating on Quinn with Donna. As fans recall, Quinn found out about Donna’s honey cure and threatened the woman. Then, Quinn demanded that Donna be eliminated from Eric’s company and life.

Eric just couldn’t stay away, though. Eric is sleeping with Donna, which Quinn will eventually find out. In the meantime, Eric does feel guilty about betraying Quinn. However, Quinn was the one that cheated first. So, Eric might justify his actions to a certain extent.

The Bold And The Beautiful Spoilers – Romantic Surprise Backfires

It’s clear that Eric and Quinn are not happy together. So, why keep beating a dead horse? Quinn has feelings for Carter, and it’s mutual. As for Eric, he’s obviously happier with Donna. So, when Quinn finds out the truth, could she file for divorce? It seems that it would be better for “Queric” to go their separate ways.

What do you think of Eric and Donna having a secret tryst? Do you think Carter and Quinn should give romance another try? Is it time for Quinn and Eric to get a divorce?