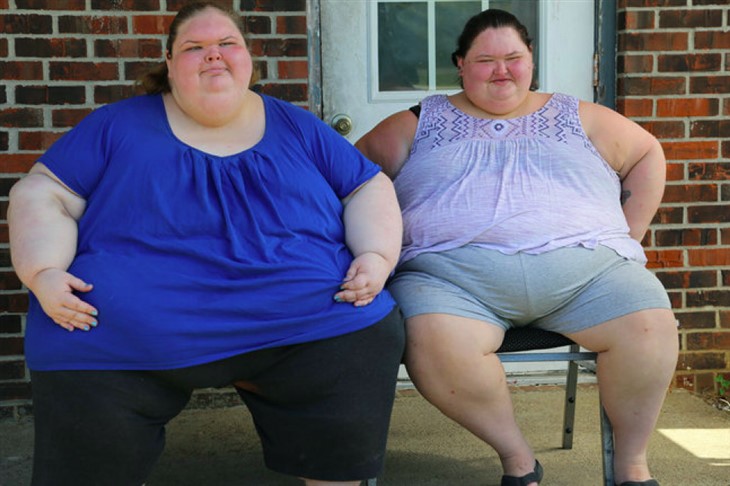 1000-Lb Sisters began season 1 by showing stars Amy Slaton Halterman and Tammy Slaton focusing together on weight loss. But two seasons later, the diet spotlight has shifted. As a result of Tammy’s repeated refusal to lose weight, Amy seems to emerge as the weight loss champion.

But now a new controversy involving BOTH Amy and Tammy has erupted. Find out why some 1000-Lb Sisters fans believe that Amy’s own diet challenges have gone unnoticed. Plus discover the most recent reasons for worrying about Tammy’s health below.

Tammy Slaton stars in a recent Instagram clip posted by TLC to advertise 1000-Lb Sisters. And the video proves the truth of that caption, “I’m gonna be me.” But the 1000-Lb Sisters star translates that motto as gulping down booze and chowing down on pizza with friends.

As a result, that video has sparked controversy. Fans fear that, as one wrote, “They are using her for booze money…. She will die before she ever makes any change. It’s no one fault but hers.”

And others believe that 1000-Lb Sisters recent episodes have shown that Tammy’s family truly loves her and desires her happiness and health. But Tammy seems to reject that love. And some fans believe that beyond rejecting her family’s affection, Tammy actually “hates and is jealous of Amy.” As a result, an increasing number of views fear that Tammy faces continually bad health.

But Amy Slaton Halterman recently sparked her own weight loss scandal. In the Reddit 1000-Lb Sisters community, some pointed out that Amy doesn’t seem to follow a diet either. As a result, these fans fear that Amy will follow in Tammy’s weight gain foot steps.

For instance, one fan wrote, “Amy’s lack of dieting isn’t talked about enough. Ever since she’s had [her son] Gage, she doesn’t look like she’s lost any weight. I get everyone’s always focused on Tammy. But Amy’s still at least 120 pounds overweight.”

Some 1000-Lb Sisters fans suspect that producers believe Tammy generates more ratings, causing the cameras to avoid showing Amy’s weigh-ins and medical check-ups. As a result, Amy potentially could gain a significant amount of weight. And her second pregnancy has caused the concern to soar.

“And now that she’s pregnant again, I am afraid she’ll use that to splurge like she did with Gage,” pointed out one viewer. “Then, having two very young children at home will be a huge excuse to ‘not diet.’ I’d love to see her lose at least another 50-75 lbs and teach the kids how to eat healthily.”

Tell us what you think. Do you believe that Tammy could still turn her life around and put her focus back on weight loss? And do suspect that Amy may cheat on her own diet without the cameras watching? After you’ve shared your views, check back on our site for more 1000-Lb Sisters news!