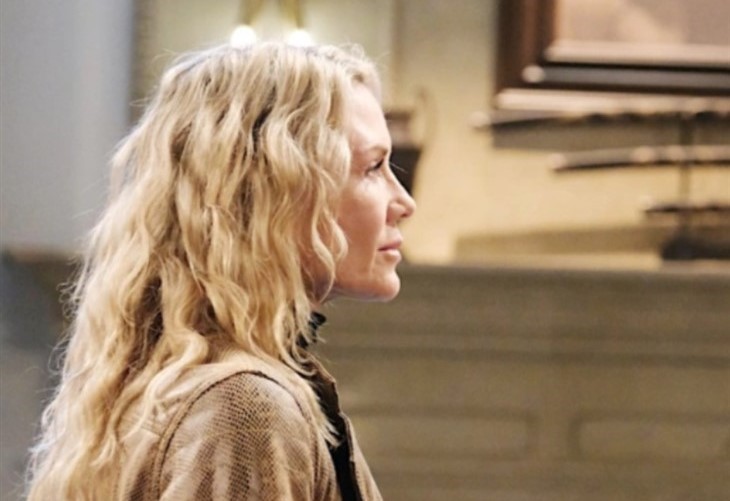 DOOL spoilers reveal that during the week of January 10, Steve “Patch” Johnson (Stephen Nichols) gave Mother Superior a sad story. Even though it was a lie, Steve needed to find a way for Kayla to get into the convent. While Steve went back to the hotel, Kayla started searching the convent for any sign of Kristen.

What “Stayla” doesn’t know is that they were seen by Kristen, who asked Mother Superior about their unexpected guests. Then, Kristen asked to use the phone. Who did she call and how will it affect Steve, Kayla, and Sarah?

During the week of January 17, Steve will go back to the hotel. When he walks in, Steve faces Kristen holding a gun. What is interesting about this is that Sarah is mentioned. So, maybe Sarah is being held hostage at the convent. Mother Superior either doesn’t know Sarah is there or perhaps Kristen gave her a clever cover story. Haiduk told Soap Opera Digest,

“Kristen’s assuming that [Kayla and Steve] are there about Sarah, but in the course of the conversation, she realizes that Steve is there for her… So, she ends up taking care of him.”

Steve tries to convince Kristen that nobody needs to get hurt. Steve promises to take Kayla and return to Salem. Steve says that nobody ever has to know about Kristen’s whereabouts. However, Kristen knows that Steve isn’t being honest. Then, Steve ends up lying motionless on the hotel room floor.

Days of Our Lives spoilers reveal that after “taking care of Steve,” his phone goes off. Kristen picks up Steve’s phone and sees a text message from Kayla. Kristen replies to Kayla that everything is just fine. Kayla may believe that Steve is the person replying to her text message.

It’s possible that Kristen’s phone call at the convent was to Ava Vitali (Tamara Braun). Ava is busy with her own drama. Ava is messing with Rafe Hernandez (Galen Gering) and Nicole Walker’s (Arianne Zucker) heads. So, she won’t have time to deal with Kristen’s emergency. However, Ava might know where Kristen’s masks are and inform Gwen Rizczech (Emily O’Brien).

Kristen mentioning Sarah to Steve in the hotel room probably means that Sarah is at the convent. Knowing that Kayla will find Sarah, Kristen has to take drastic action without going back to Salem herself. It’s possible that the real Sarah does return to Salem and might be the one talking to Maggie Horton Kiriakis (Suzanne Rogers) in the preview.

However, could Gwen “replace” Sarah to make sure she doesn’t lose Xander Cook (Paul Telfer)? This is probably why Abigail DiMera (Marci Miller) accuses Sarah of not being who she claims to be… because she was replaced by Gwen! This plot is teased to get a lot more complicated, so stay tuned to see what happens next.