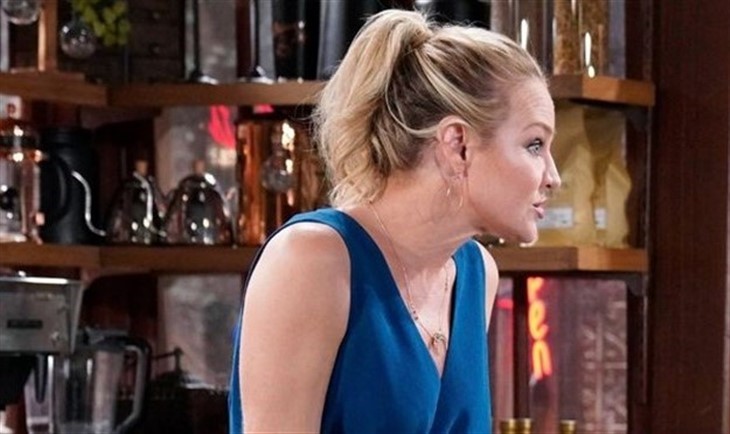 The Young and The Restless (Y&R) spoilers and updates tease that Sharon Rosales’ (Sharon Case) skill will be put to the test when she provides therapy for two very angry young men. Both Connor Newman (Judah Mackey) and Johnny Abbott (Paxton Mishkind) are angry at their mother, Chelsea Lawson (Melissa Claire Egan) and acting out; Connor wants nothing to do with her!

The Young And The Restless Spoilers – Johnny Newman Ran Away

Chelsea forced Billy Abbott (Jason Thompson) and Victoria Newman (Amelia Heinle) into telling Johnny that she was his birth mother, fearing if they didn’t she would. She was that insistent that it was time that Johnny knows the truth; in her opinion he was plenty old enough. Billy and Victoria discussed the possible outcomes if they didn’t and she told him instead, and agreed that could not happen, even if he became angry at his father.

Billy had cheated on Victoria with Chelsea, and she became pregnant with Johnny, the couple making up afterwards and Victoria adopting baby Johnny. But Johnny had a terrible reaction as they sat down with him in Chancellor Park; he ran away from them in confusion and anger, and they’ve opted for therapy.

Connor is way ahead of his years in understanding adult issues, as well as seeing through his mother when she claims something’s in his best interests. He’s had to grow up much too quickly with such messed-up parents, more her than Adam Newman (Mark Grossman), who has been comparatively stable the last couple of years. He did get close to Rey Rosales (Jordi Vilasuso) and of course his death affected him, but he knew Rey was a family friend, not a potential stepfather. Chelsea seemed to be going for Rey as a boyfriend and even Connor saw through it and lost respect for her although he would never tell Sharon. When Chelsea told him she was his cousin Johnny’s mother, he knew it was all about her making a play for Billy and told her so, losing all respect for her.

Sharon’s got her work cut out with these two very angry and confused boys, in Johnny’s case, puberty and hormones influencing him as well. In Johnny’s case, the anger is not at Victoria, but at Billy for cheating on her and at Chelsea for not stepping up to care for him. It’s too late now, he doesn’t want Chelsea’s mothering and it’s awkward for him to even associate with his cousin-brother Connor.

Connor is very upset as well, losing the friendship of his cousin and not wanting to accept Johnny as a brother, and clearly seeing through Chelsea’s machinations. Neither boy deserved the anger and confusion caused by Chelsea as Sharon agrees with Connor-it’s not about either boy, and all about her.