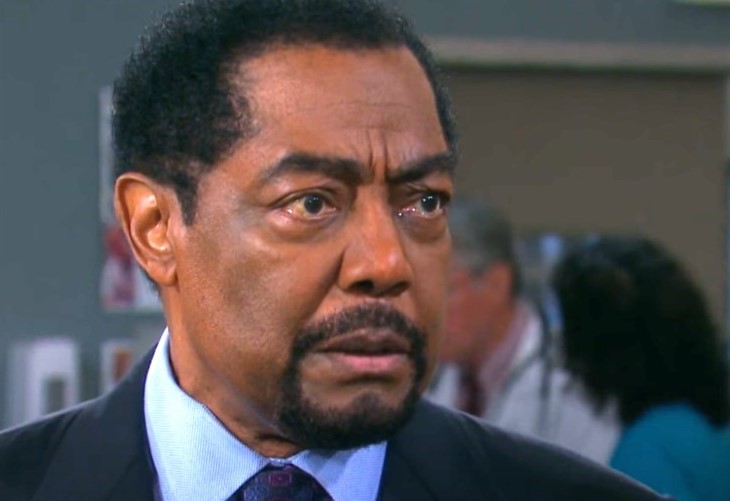 Days of Our Lives spoilers for the week of October 25 reveal that Abe Carver (James Reynolds) flatlines. When the mayor’s heart stops beating, Kayla Johnson (Mary Beth Evans) does what she can to try and resuscitate the patient. However, will she be able to bring Abe back to life or will Salem be attending Abe’s funeral instead of his wedding?

Days Of Our Lives Spoilers – Jake DiMera Jumps Into Action

DOOL spoilers reveal that Jake DiMera’s (Brandon Barash) past comes back to haunt him. Jake told Gabi Hernandez (Camila Banus) that he was present when the bar owner in Philadelphia died. However, Jake says he was not the one that took the man’s life. It was Carmine who killed that man.

Carmine is going to show up in Salem and Abe will become another one of his victims. When Abe falls to the ground and holds his chest in pain, Jake will try to help. Abe is rushed to the hospital while Jake is arrested.

During the week of October 25, Abe will be in the hospital but flatlines. When Abe’s heart stops beating, everyone will pray that he can be brought back to life. It is teased that Abe’s family and friends will all remember Abe’s most memorable moments during this time in Salem. As fans know, Abe is a veteran character and has been on the show for decades.

Days of Our Lives spoilers reveal that when a character is killed off, it’s usually not confirmed this early. So, it sounds like Abe will probably be brought back to life. It is stated that Kayla jumps into action and tries to bring Abe back to life. Chances are that Kayla is successful.

Around the same time, Rafe Hernandez (Galen Gering) will be continuing his investigation. Rafe has a conversation with Jake about what happened with Abe. Jake will insist that he’s an innocent man and didn’t try to kill Abe. When Rafe wants to know the whole truth, Jake might fear Gabi could be Ava Vitali’s (Tamara Braun) next target. However, Jake also doesn’t want to go down for murder or attempted murder when he had nothing to do with Abe’s medical crisis.

How will Rafe react when Jake tells him that Ava is behind Carmine coming to Salem? Rafe believes that Ava is a changed woman and has nothing to do with the mob anymore. This might prompt Rafe to get to the truth by approaching someone else. Philip Kiriakis (Jay Kenneth Johnson) probably won’t say anything about Ava, but could Nicole Walker (Arianne Zucker) get to the truth?