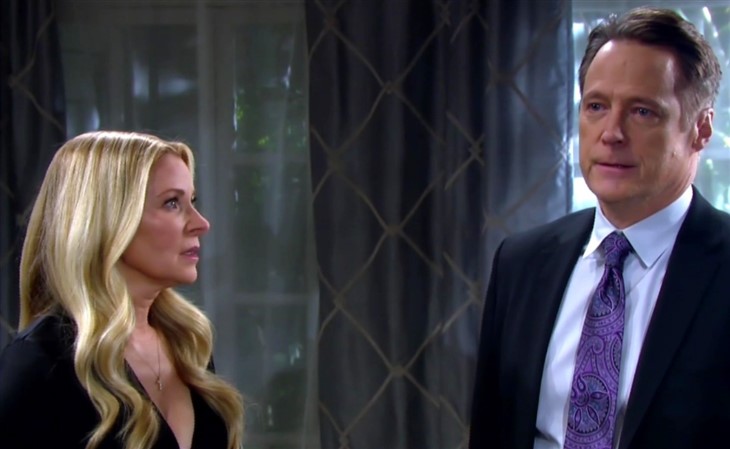 Days of Our Lives spoilers reveal Jennifer’s life spiraling more out of control than ever before.

The toll of losing her child, Abigail DiMera (Marci Miller), forced Jennifer Rose Horton Deveraux (Cady McClain) to return to the pill bottle after being in recovery from her addiction since 2016. Things get worse when she and Jack Deveraux (Matthew Ashford) learn that Clyde Weston (James Read) murdered Abigail and he’s been taken into custody.

When Jack takes off to the Salem PD, Jennifer grabs the pill bottle and then pictures Abigail right there in the Horton living room. Actress Cady McClain told Soap Opera Digest that she sometimes still feels her own mother’s presence and her best friend’s presence, so she didn’t think this was unusual for Jennifer.

“What I feel is upsetting for her is to not know whether it’s a spiritual connection or a drug-induced experience, and that can also be confusing and upsetting to a person who’s dealing with grief,” McClain said in the October 3, 2022, issue of Soap Opera Digest.

Things take a turn when a high Jennifer decides to get behind the wheel of a car but thankfully, she makes it home ok. However, it’s a harrowing ride and when she gets back to the Horton house, Jack and Julie Williams (Susan Seaforth Hayes) are worried sick about her.

“She wasn’t hurt so that is something she feels she can hide and doesn’t want people to know about, how badly she’s doing, how out of control she is,” McClain said.

Jennifer somehow thinks she can continue going on like this but that’s the furthest thing from the truth. In fact, things might only get worse from here.

“There’s some real unfinished business at the end of this particular arc that’s going to come back and haunt the family for some time, and they will be revisited again and again by this incident. It opens wounds and creates a lot of secrets.”

Will Jack and Jennifer’s latest attempt at marriage survive the loss of their daughter? Well, their love has survived Jack dying multiple times, so anything can happen. Stream new episodes of Days of Our Lives weekdays on Peacock starting at 6 am EST.