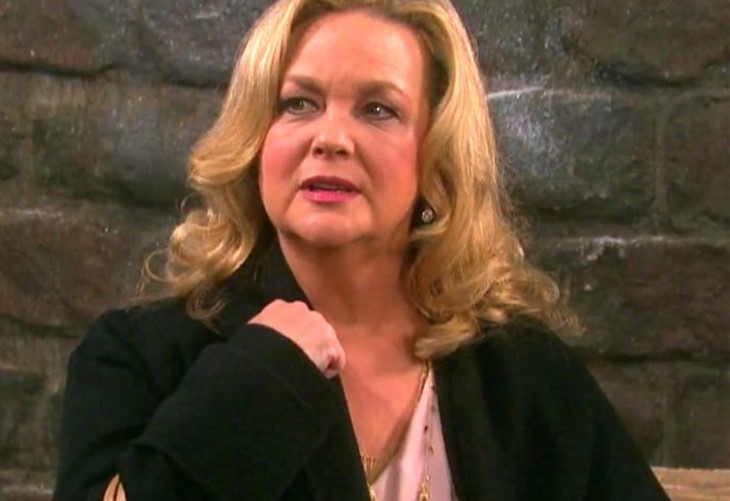 Days of Our Lives spoilers and rumors tease that a jealous Anna DiMera (Leann Hunley) will be furious as “NuRenee” aka Sarah Horton (Linsey Godfrey) won’t stay away from her Tony DiMera (Thaao Penghlis) in upcoming episodes of Days of Our Lives!

Days of Our Lives viewers will remember that when Sarah was injected with a syringe full of drugs with psychotic effects, she likely woke up on Kristen DiMera’s (Stacy Haiduk) island not knowing who she really was. Days of Our Lives viewers will remember that Abigail DiMera (Marci Miller) ingested just a few drops of the same drug orally, in a drink, and she was psychotic for many months afterwards. During Sarah’s time of recovery from the psychotic drugs, Kristen provided her with a diary of the late Renee DuMonde’s (Philece Sampler) and as Sarah read it, somehow she took on her identity and was pining away for Tony. Now that Tony, along with Chad DiMera (Billy Flynn) have rescued all of Kristen’s captives and all are home, Sarah won’t stay away from Tony, and Anna is furious and jealous!

Longtime Days of Our Lives viewers will remember that Renee was one of Tony’s first wives, although the union did not last long – like when Tony married Kristen for a minute, the marriage was not valid because Renee and Tony were half siblings through Tony’s adoption. The marriage was so short and invalid as well that it’s barely mentioned – but in spite of how short it was, Renee had a deep obsession with Count Tony and would not stay away from him. Days of Our Lives viewers can understand where Sarah took on Renee’s identity as her own why she would also be obsessed with Tony and her love for him, even though this would not happen were she in her right mind! Poor Sarah was apparently a blank slate mentally when she awoke from the drugs she was injected with, and Kristen had been caring for her there on the island even though it was seen as being held hostage.

Days of Our Lives viewers can only imagine how awkward this whole situation is for Tony, not wanting to hurt Sarah but not quite knowing how to act around her either! Prior to them all leaving the island, Abigail had tried to talk some sense into Sarah but was unable to shake her back to reality and realizing that she’s Sarah, not Renee! But sadly, as Days of Our Lives viewers will see, all that is left of Sarah’s identity is a empty and confusing shell, one that will take possibly years of therapy to restore. Anna tries to be understanding of Sarah’s condition but it is very difficult for her to keep from being angry and jealous as the attractive younger woman keeps chasing after her man! After carrying around what she thought were the ashes of her Tony for so many years in a cocktail shaker, Anna is determined not to lose him again!