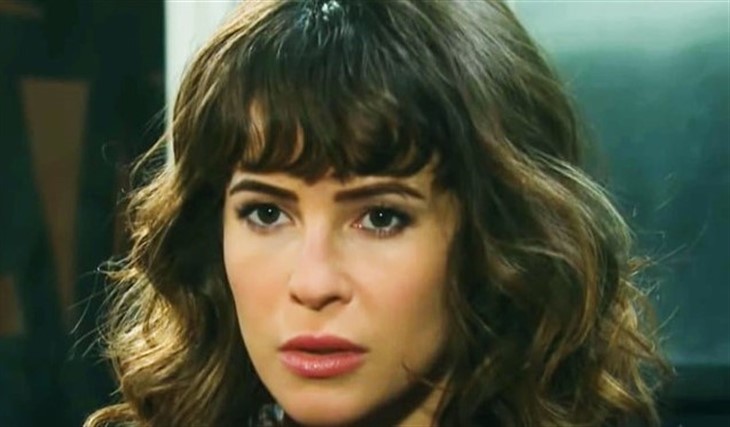 Days of Our Lives Spoilers tease that Kristen DiMera’s (Stacey Haiduk) abduction of Dr. Sarah Horton (Linsey Godfrey) is about to take a turn that no one, especially Anna DiMera (LeAnn Hunley) could have guessed. Viewers may recall that Sarah was about to marry Xander Cook (Paul Tefler) when she discovered Kristen was impersonating Susan Banks (also Stacey Haiduk). Kristen had convinced Susan to switch places with her, since Kristen was in prison, so she could make sure that Brady Black (Eric Martsolf) wasn’t cheating on her.

Days Of Our Lives Spoilers – Dr. Sarah Horton Was Stuffed In A trunk!

Kristen begged Sarah to keep quiet, but Sarah refused. Kristen knocked Sarah out and since she couldn’t let Sarah tell anyone that Kristen wasn’t in prison. So Kristen began an elaborate plot to get Sarah out of town. Kristen arranged in so that everyone would believe that Sarah called off the wedding and left town with Dr. Rex Brady (Kyle Lowder). But in truth Sarah had gotten free and ended up accidentally drugging herself with a mind-altering concoction in an effort to incapacitate Kristen. Sarah was barely coherent as Kristen stuffed her in a trunk and sent her out of Salem to a deserted island!

DOOL Spoilers – Dr. Sarah Horton Is No Longer Herself!

It was many months before Sarah was seen again. Kristen made sure that Sarah was cared for during the times that Kristen was in Salem. Sarah eventually regained control of her faculties but had no memory of who she was. To pass the time, Kristen gave Sarah the diary of Renee Dumonde (the late Philece Sampler) to read. Probably as a result of being drugged, Sarah believes that SHE is actually Renee. The real Renee was murdered by the Salem Slasher decades ago and looked completely different, but Sarah is adamant!

Not long before Renee died, she found out that she was Stefano Dimera’s (the late Joe Mascolo) daughter. This ended her storybook romance with Tony DiMera (Thaoo Penghlis), since they were now brother and sister. But up until that point, she and Anna had been bitter rivals for Tony’s affection. Anna was actually a suspect in Renee’s death at first because of their mutual hate for each other. Renee brought out the worst in Anna and Sarah’s delusions is going to bring all of those feelings rushing back. Sarah believes that she and Tony are still in love Anna is not going to happy at all with this new development!

Will Sarah continue to believe she is Renee? How will Tony react to Sarah’s claim? Will Anna return to some of her more devious ways to keep Sarah and Tony apart? Anything can happen in Salem so stay tuned to Days of Our Lives airing weekdays on NBC. And don’t forget to check back right here regularly for all your Days of Our Lives news, information and spoilers!