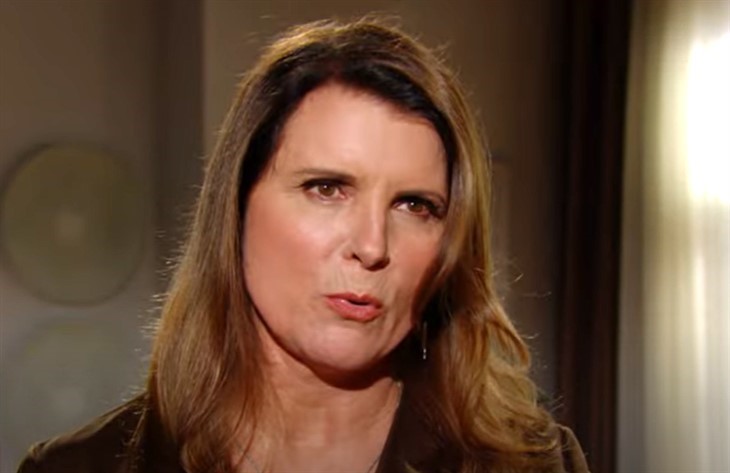 Viewers of The Bold and The Beautiful will recall Sheila has been a close and annoying presence anywhere she thinks she needs to be, whether it be snooping and nagging Deacon Sharpe (Sean Kanan) to go after Brooke or pushing Taylor Hayes (Krista Allen) to go after Ridge! Of course, Sheila would call it “encouragement” even though her continuing ulterior motive is to make sure “Bridge” is broken by “Tridge” becoming a reality again and breaking Brooke herself in the process, which she’s pretty far along in doing! Sheila was there at Il Giardino after the brawl that Ridge started and Brooke broke up, with the bullying Ridge taking it that Brooke trying to save Deacon’s life was favoring Deacon over him! Viewers of The Bold and The Beautiful also know that Deacon talked to Sheila about Brooke having defended him to Ridge, so that has given her more inspiration to dig at Brooke!

B&B Spoilers – Brooke Forrester Is Hanging Onto To A Thread

Viewers of The Bold and The Beautiful know that after Ridge and Brooke’s heart-wrenching goodbye when he told her that he and Taylor are indeed back together, Brooke continues to hang onto a thread of hope that he’ll come back to her! Longtime viewers of The Bold and The Beautiful will recall that Steffy Forrester Finnegan (Jacqueline Macinnes Wood) has had some very good points about all the times that Ridge has been hurt by Brooke’s cheating on him with other men. Brooke, indeed, has lived up to the derogatory nickname that Stephanie Forrester (Susan Flannery) gave her so many years ago when Brooke had slept with all three Forrester men and waffled back and forth between them and a parade of others! Deacon was married to her daughter with Eric Forrester, (John McCook) Bridget Forrester (Ashley Jones) when she had her first affair with him that produced Hope Spencer (Annika Noelle) and that is a pretty damning history!

Viewers of The Bold and The Beautiful will soon see Brooke and Sheila get into it over Brooke’s loss of Ridge, and Sheila will dig the knife into her and twist it! Viewers of The Bold and The Beautiful will not be surprised at Brooke’s depth of denial that Ridge always comes back to her and soon he will again after he cools off! Sheila will act like she’s trying to bring Brooke out of denial with some cold and hard and ugly facts she knows, for one that Taylor and Ridge are now living like man and wife again and Brooke could never hold a candle to Taylor! Brooke will deny, deny, deny the truth again and again and Sheila will verbally try to pound the truth into Brooke’s already throbbing head, and she’ll be cruel, telling Brooke she was the one who drove Ridge away!