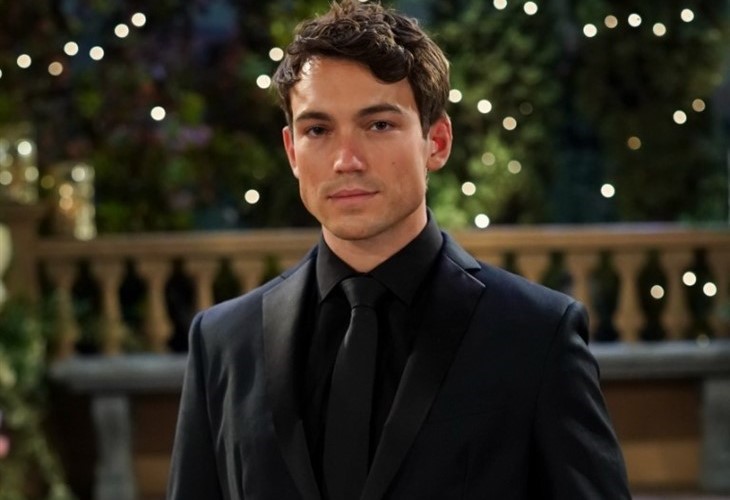 The Young and The Restless spoilers and updates tease that Noah Newman (Rory Gibson) desperately needs a new love in his life to get his attention off the no longer available Tessa Porter (Cait Fairbanks)! Future episodes of The Young and The Restless may reveal a special someone for Noah in the person of Jack Abbott’s (Peter Bergman) newfound granddaughter who may return to Genoa City with him!

Noah has never revealed much about the woman in London – if it even happened at all, because his decision to move back to Genoa City was almost immediately after reconnecting with Tessa at his aunt Victoria Newman’s (Amelia Heinle) wedding to Ashland Locke (Robert Newman)! It’s been obvious Noah still has a torch for Tessa, even though he is trying desperately to not wear his heart on his sleeve; he desperately needs a new young woman to catch his eye and capture his heart! In the meantime, Jack has been getting mysterious texts from someone who appears to be connected to his older son Keemo Volien Abbott (Philip Moon) from Los Angeles-might Keemo have a daughter close to Noah’s age now?

Of course, viewers of The Young and The Restless know that off-screen, Noah might be crying all night over his lost Tessa, but he gets a little less mopey and perhaps a little more detached from her soon. In the February 21 episode of The Young and The Restless, Noah has some wedding planning advice for Tessa and Mariah, while they, he, Sharon Rosales (Sharon Case) and Nick Newman (Joshua Morrow) are all in Crimson Lights. Tessa and Mariah have been having myriads of different ideas for their wedding and realize they have too many – they go over to where Nick, Sharon and Noah are and ask Noah to pick and he suggests to combine parts of all into one! Everyone thinks this a great idea, and that problem is solved, but not the problem of Noah needing a new love life!

Viewers of The Young and The Restless will see Jack head out to Los Angeles to see what his mystery texter is talking about him missing, and encouraging him he’ll be glad he pursued it! Viewers of The Young and The Restless know Jack’s got a pretty empty house now, with Traci Abbott (Beth Maitland) not home very often as well as Ashley Abbott (Eileen Davidson), and Kyle Abbott (Michael Mealor) is in Milan with Harrison Locke (Kellen Enriquez).

Jack certainly could use some family in the house on a regular basis and the Keemo connection has been proven by Phyllis Summers (Michelle Stafford). She found the texter’s phone number to be connected to someone who has the same name as Luan Volien Abbott’s (Elizabeth Sung) father so there is a family connection. Perhaps this will be a grown granddaughter close to Noah’s age who wants to move to Genoa City; and she’ll be Noah’s Ms. Right!

Sister Wives: Kody Claims He Never Said No To Being Intimate With Christine