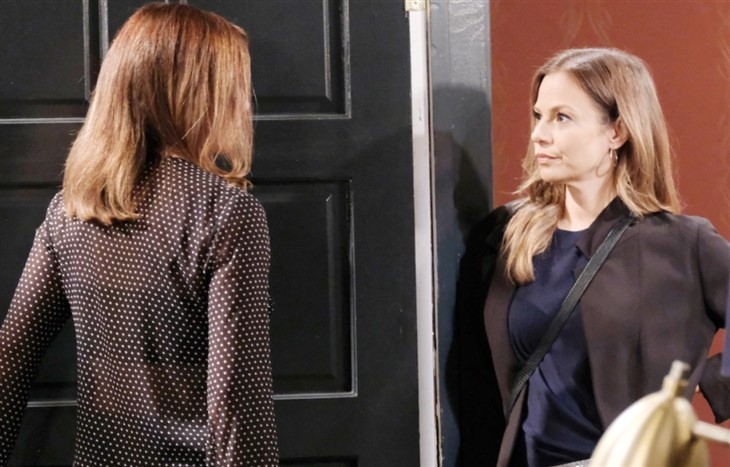 Days of Our Lives spoilers reveal that the credits in recent episodes teased what kind of role Linsey Godfrey will be playing. The actress isn’t just credited with Sarah Horton, but two additional roles. One is Ava Vitali (Tamara Braun) as Sarah and Gwen Rizczech (Emily O’Brien) as Sarah. So, it’s clear that the two bad girls are going to play with masks.

Days Of Our Lives Spoilers – Searching For Sarah Horton

It is teased that Steve “Patch” Johnson (Stephen Nichols) gets into a confrontation with Kristen DiMera (Stacy Haiduk) in Italy. Kristen mistakenly assumes that Steve is there about Sarah. Kristen considers Steve to be a huge problem, especially when she finds out that Steve is there for her, not Sarah. There is no way Kristen is going back to prison, so she takes drastic action.

It is confirmed in Soap Opera Digest that Steve gets knocked out. However, there is speculation that Steve ends up disappearing, leaving Kayla Johnson (Mary Beth Evans) in a panic. So, it sounds as if Sarah isn’t found yet and Kristen escapes.

Days of Our Lives spoilers reveal that when Kristen saw “Stayla” in the convent, she made a phone call. That phone call was probably a 911 to Ava. It is also stated that Gwen sees a familiar face at her door. This is most likely Ava wearing a Sarah mask. After all, Kristen will want the search for Sarah to stop. The only way to do that is if everyone thinks Sarah is just fine and back in Salem.

Ava doesn’t have time to pretend to be Sarah, though. Ava is busy with her own scheme to punish Rafe Hernandez (Galen Gering) and Nicole Walker (Arianne Zucker). So, Ava probably visits Gwen wearing the Sarah mask. Then, she takes it off and suggests Gwen wear it so Xander and Abigail stop looking for the missing doctor. The fake Sarah can break Xander’s heart all over again, which will safeguard Gwen’s relationship.

However, the truth gets found out soon enough, especially when Gwen impersonates Sarah in front of Abigail. The reporter will notice that Sarah isn’t acting like herself, but someone oddly familiar. Will Abigail realize that Gwen is impersonating Sarah, or will she assume it’s Kristen? When the truth finally comes out, is there any possibility of Xander forgiving Gwen?