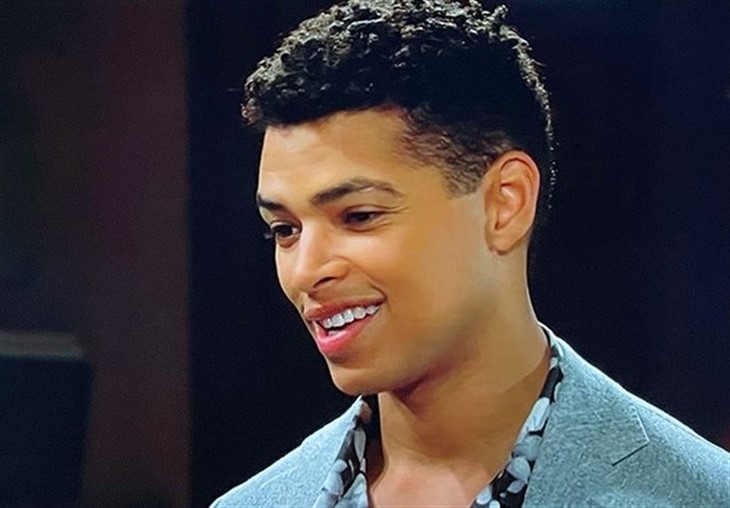 The Bold and the Beautiful spoilers document that Zende Forrester Dominguez (Delon de Metz) believed his future was destined. He would ask Paris Buckingham (Diamond White) to marry him, she would say yes, and the wedding would happen at the Forrester mansion, officiated by Carter Walton (Lawrence Saint-Victor) as soon as this year.

Zende got the message from Paris. She is not interested in settling down right now. That did not deter him from believing they still had a bright future.

But Zende did not know that a text message Paris received was from Carter and that digital communication tipped her off to the intended ring presentation. Zende also was not initially aware that Paris and Carter are interested in each other.

It was okay for Paris to head off Zende’s proposal. Doing so saved him from heartache and embarrassment.

Paris cares about Zende, is romantically involved with him, and does not want to hurt him. At the same time, she is not in love with him and does not see him as her husband, at least not yet.

But she needs to be honest with him, not string him along or offer what would be false hope. Zende deserves that respect, and while it will impact his emotions is the right course to take.

Carter caught the eye of various ladies within the last year. Zoe Buckingham (Kiara Barnes) accepted his proposal. Quinn Fuller (Rena Sofer) became intensely involved before breaking their connection. Katie Logan (Heather Tom) had a bit more than a look-over date with Carter at Il Giardino but did not follow up before he kissed Paris.

The connection with Paris is different than what he had with Quinn or the flirtation with Katie. Carter had a bond with Paris because of what happened with her sister. So, this friendship has developed from there.

Because of Zoe’s misguided pursuit of Zende, Carter knows that he has to be careful. He is friends with Zende and works with him. So, connecting with Paris, while she is still technically with de Metz’ character, is problematic.

TheBold And The Beautiful Spoilers – Zende Forrester Dominguez Is Not Hurting

Zende, like Thomas Forrester (Matthew Atkinson), receives a lot of attention from the models he works with at Forrester Creations. So, the teased kiss that he shares with an appealing lady will forward this storyline.

Paris should not be jealous because she does not want a committed connection. Drama naturally arrives when Zende realizes that Paris’ interest has shifted to Carter.

While she feels good right now, the impression Paris has made on two men’s hearts will spark a competitive reaction on both sides.