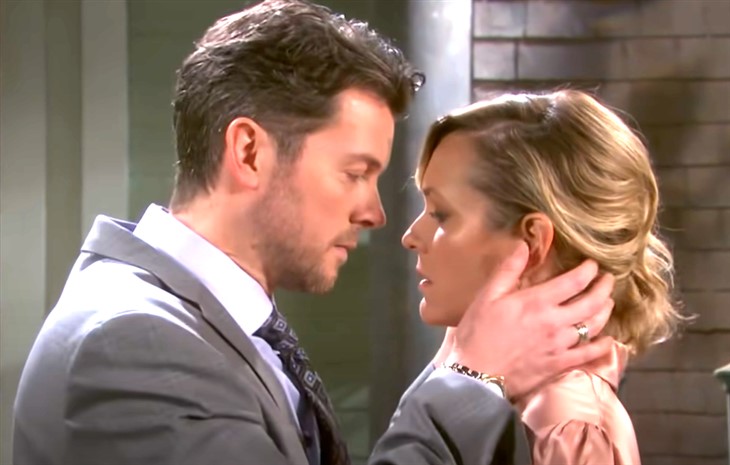 Days of Our Lives spoilers tease that EJ DiMera (Dan Feurreriegel) will ask his twice ex-wife Nicole Walker (Arianne Zucker) out in an upcoming episode of Days of Our Lives!

Days of Our Lives viewers will recall that Xander Cook (Paul Telfer) had convinced Nicole to hire him at Basic Black, after which Brady Black (Eric Martsolf) fired him. It had been Xander, paid off by Sami DiMera (Alison Sweeney) who made the big announcement at Nicole and Eric Brady’s (Greg Vaughan) anniversary party that wound up splitting Nicole and Eric forever. He told how Nicole and he spent a hot night in bed at the Salem Inn, which Sami had figured out and was determined to rid her twin Eric of Nicole forever! Never mind Sami was the pot who called Nicole the kettle black, having an affair with her first husband Lucas Horton (Bryan Datillo) while still married to EJ! Xander is the last person Nicole wants to have any contact with at all! EJ assures her he won’t be working at Titan after all, or anywhere else, for that matter!

Days of Our Lives viewers will recall that Sami was found out thanks to Kristen DiMera (Stacy Haiduk) who wrote EJ a letter about what she knew! Then Xander was arrested for Dr. Clay Snyder’s (Michael Lowry) murder after he didn’t do such a good job of weighting his dead body down and he floated to the top of a lake! Xander had literally scared Snyder to death, and EJ took his case. Xander had been trying to get his job back at Titan but then EJ had his charges reinstated and off he went to jail when he didn’t pay EJ his million dollars back! EJ and Nicole continue to discuss Xander and his predicaments, and while they are talking, EJ asks Nicole out to dinner. Longtime Days of Our Lives viewers will recall that EJ and Nicole have been married twice in the past, the same as EJ and Sami have.

Days of Our Lives viewers know that EJ and Sami aren’t even divorced yet, but here EJ is asking Nicole out on a date! Days of Our Lives viewers will recall that Sami was kidnapped in front of Rafe Hernandez’ (Galen Gering) house right after EJ kicked her out of the DiMera mansion. There is a good possibility that EJ had her kidnapped, and she is still missing! Even though Sami has not been heard from or seen in several weeks, EJ is determined to move on, and he wants to move on with Nicole.

To EJ, Nicole is known territory – he knows her as well as he knows Sami, and right now, his love life and his heart is not something that he wants to risk by moving on with someone new! EJ is sincere in wanting to spend some time with Nicole – outwardly. But no one would be surprised if subconsciously, he hopes to be comforted by Nicole or possibly even make Sami jealous long distance. However, if he is the one who had her kidnapped, then his ploys to make her jealous are a ruse to cover up the truth! As for Nicole – even she may think it’s too soon for either one of them to move on with each other romantically!