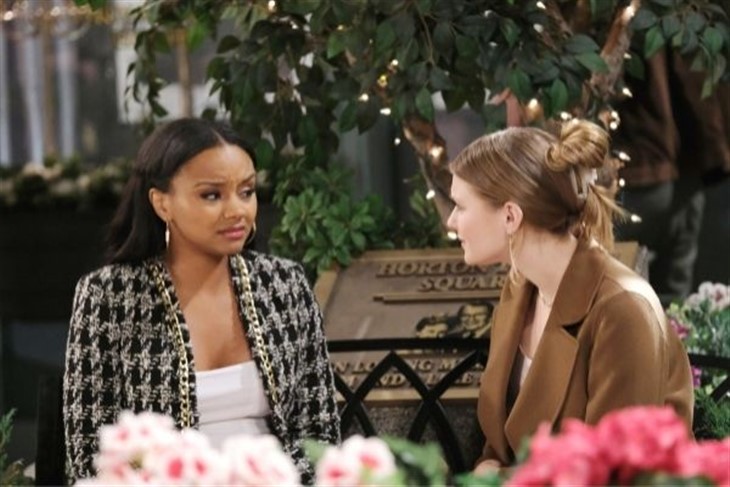 Days of Our Lives spoilers reveal that Johnny DiMera aka “JoDevil” (Carson Boatman) exposed Allie Horton’s (Lindsay Arnold) secret. Chanel Dupree (Raven Bowens) tried to protect her BFF by claiming Johnny was lying. However, Allie confessed to Tripp Johnson (Lucas Adams) that it was true. Could Chanel try to get justice by going after Johnny with everything she’s got?

Days Of Our Lives Spoilers – ‘JoDevil’ Destroys Another Couple

DOOL spoilers reveal that head writer Ron Carlivati teased to Soap Opera Digest that the devil hates happy couples. The devil is going around Salem driving wedges in those who are happy and in love. Jake DiMera (Brandon Barash) and Gabi Hernandez (Camila Banus) are one couple who has already been targeted.

Tony DiMera (Thaao Penghlis) and Anna DiMera (Leann Hunley) could be next, especially with Sarah Horton (Linsey Godfrey) thinking she’s Renee DuMonde (formerly played by Philece Sampler). Then, there was the real Johnny and Chanel. Now it just happens to be Tripp and Allie.

If Allie had told Tripp the truth about what happened between her and Chanel, the devil wouldn’t have been able to use it to his advantage. However, Allie chose to keep her cheating a secret and as a result, the devil exposed it during Tripp’s marriage proposal. Allie is now heartbroken and insists she wants to spend her life with Tripp. However, Tripp is right to wonder if Allie is really in love with Chanel.

Days of Our Lives spoilers reveal that Chanel is already going after Johnny during their divorce. However, during the week of March 7, Chanel could try to get justice for Allie as well. It is confirmed that Chanel will try to console Allie as she cries over her broken heart.

While Allie and Chanel could get passionate again, there is a more important factor in this storyline. Chanel could go after Johnny with everything she’s got.

It is confirmed that the devil will jump into another Salemite. So, just when Chanel makes Johnny suffer the price, the devil will vacate the DiMera heir’s body. Fans may recall when Johnny tried to fight the devil in a recent episode.

Johnny said that he couldn’t let the devil continue hurting the people he cared about. Johnny mentioned how much he loved Chanel in that conversation. So, when Chanel goes after Johnny even harder than she already has, how will that play out?

Johnny will likely realize how much Chanel and Allie were destroyed by his actions while possessed. Johnny just might give Chanel whatever she wants to atone for the devil’s actions. However, that could create some serious problems when EJ DiMera (Dan Feuerriegel) gets out of prison, especially if there is a ton of money involved in the divorce settlement. Plus, how will Chanel feel once she learns that it wasn’t Johnny who did those things but the devil himself?