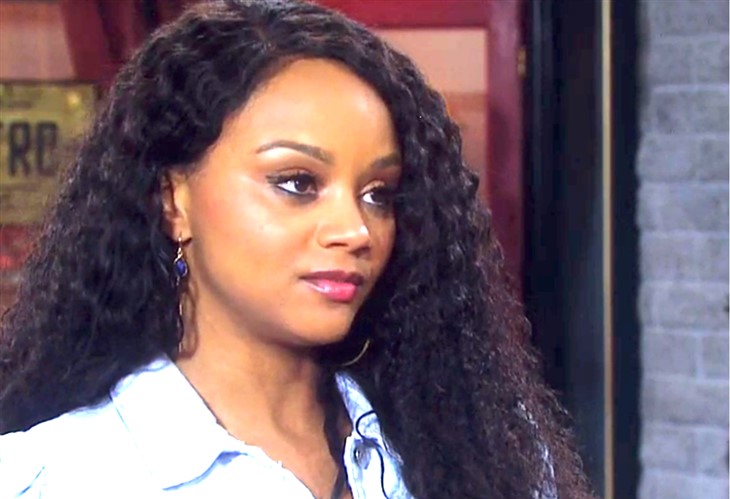 Days of Our Lives spoilers indicate that Chanel Dupree (Raven Bowens) and Allie Horton (Lindsay Arnold) are about to hit their first stumbling block. Chanel may end up regretting her decision when Allie begins to flirt with Alex Kiriakis (Robert Scott Wilson). Did Chanel choose the wrong twin?

Days Of Our Lives Spoilers – Alex Kiriakis Is A Playboy

Days Of Our Lives spoilers reveal that Alex is a playboy and isn’t very particular about his conquests. However, Alex may not realize that Allie and Chanel are a couple. Alex will see the young blonde and immediately want to know more about her. Of course, Alex will probably assume they are just friends.

Alex may even go into caveman mode and pull Allie into a kiss before she has a chance to stop him. Alex fashions himself a lady’s man and acts accordingly. Rumors indicate that there will be issues with Maggie Kiriakis (Susanne Rogers) over this very thing. Will Alex come between Allie and Chanel?

Days of Our Lives spoilers say that Chanel is likely to see the interaction between Allie and Alex. Chanel will also be furious when she does. Allie is supposed to be committed to their relationship. Will Chanel regret choosing Allie in the first place?

Allie may stray from her relationship. After all, Allie is bisexual, so being attracted to a man isn’t out of the realm of possibilities. Allie is also her mother’s child. Sami Brady (Alison Sweeney) never knew when to stick with what she had and always searched for greener pastures. Will Allie fall into line in her mother’s footsteps?

Days of Our Lives Spoilers – Could Johnny Dimera Be Behind This?

Rumors suggest that Johnny Dimera (Carson Boatman) will stop at nothing to prove that he is the right choice for Chanel. Could Johnny talk Alex into making a play for his sister? Alex is new in town and could be open to helping Johnny. Will Johnny get the girl by having Alex seduce his sister?

Johnny is very much like his father E.J. and will do anything to get what he wants. Johnny is not beyond having someone play up to his sister to make a point. Will Alex do Johnny’s bidding and at what cost? After all, Dimera and Kiriakis’ don’t usually hang out together as friends. Will Johnny and Alex become friends after this little project?

Johnny isn’t really worried about making friends, he just wants to get his way. Will Johnny break up Allie and Chanel by using Alex? Will Chanel move on with Johnny or wash her hands of both Johnny and Allie?