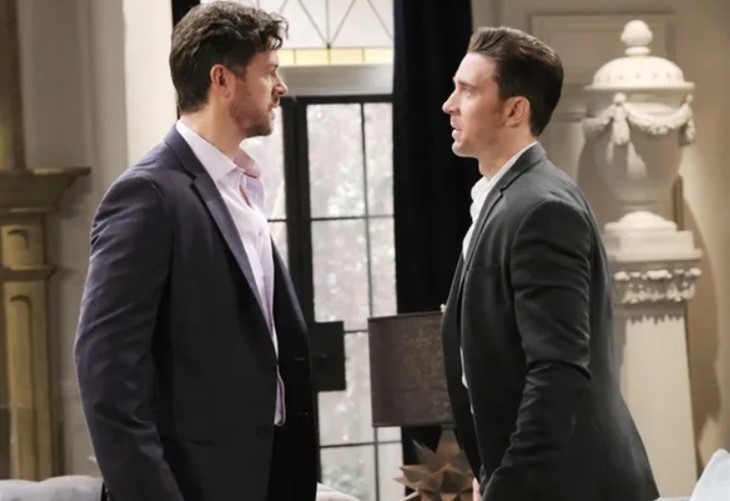 Days of Our Lives spoilers reveal that Belle Brady (Martha Madison) has an interesting story to tell EJ DiMera (Dan Feuerriegel). It is also teased that Chad DiMera (Billy Flynn) warns EJ about Kristen DiMera (Stacy Haiduk). Chad may explain why he testified the way he did. Kristen could be blamed for impersonating her brother, which could lead to EJ seeking revenge.

DOOL spoilers reveal that Johnny DiMera aka “JoDevil” (Carson Boatman) convinced EJ to sign over his company shares before the trial. However, those shares won’t do “JoDevil” any good if EJ goes free.

So, the devil made sure that Chad wasn’t able to tell the truth while on the stand. Knowing that Chad would return to testify after the recess, “JoDevil” impersonated EJ and forcibly smooched Abigail DiMera (Marci Miller). It worked and Chad testified that EJ should be locked up. The judge agreed and rendered a guilty verdict.

Even though EJ doesn’t think there is any possibility of avoiding prison, Belle isn’t giving up. Belle ends up telling EJ an interesting story that could change everything. So, she probably confronts Chad and asks him why he changed his mind about the testimony he gave at EJ’s trial.

Chad will explain what happened when he walked in on EJ forcibly kissing Abigail. However, Belle will realize that EJ couldn’t have been there because she knows for a fact that he was with her during recess.

Days of Our Lives spoilers reveal that Chad warns EJ about Kristen. Chad realizes that there were two EJ’s at the courthouse. Plus, Abigail told him about thinking Sarah Horton (Linsey Godrey) is literally not herself. Before disappearing, Abigail shared her theory with Chad, which he relays to Xander Cook (Paul Telfer).

Chad will probably tell EJ that Kristen is up to her old tricks with the masks again. It’s only natural for them to assume that EJ didn’t kiss Abigail at the courthouse, but it was Kristen pretending to be EJ. Now that Abigail is missing, Chad might worry that Kristen has done something to his wife.

When thinking why Kristen would impersonate him, EJ might think that she wants to take over DiMera Enterprises again. Of course, it could also be revenge for EJ not representing her.

Even though Kristen didn’t impersonate EJ, that is the only conclusion he can reach at this time. EJ won’t appreciate being betrayed by his own sister. EJ will be determined to get revenge. As Kristen digs a deeper hole for herself with the island captives, she could turn to EJ once again for help. However, EJ will have no interest in helping her and could seal her fate.