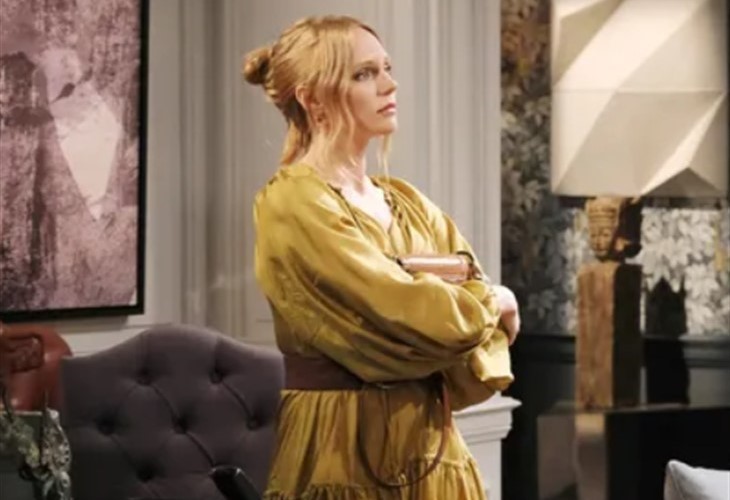 Days of Our Lives (DOOL) spoilers tease that after finding herself captive on an island, Abigail DiMera (Marci Miller) will find herself facing off with Kristen DiMera (Stacy Haiduk) in an upcoming episode of Days of Our Lives!

Days of Our Lives viewers will recall that Abigail thought she’d found Kristen in disguise – as Sarah Horton (Linsey Godfrey), but was quickly proven wrong, although she was on the right track; Kristen had sent her Sarah mask to Ava Vitali (Tamara Braun). Abigail thought she’d found Gwen Rizchech (Emily O’Brien) impersonating Sarah, but forgot that Gwen didn’t know her well enough to pass it off, and continued confronting “Sarah” in Horton Town Square, trying to tear the mask off!

This will go on into the night, and she’ll finally corner “Sarah” and tear the mask off, only to reveal Ava, and as Ava is laying on the ground, Gwen catches up and clocks Abigail in the head with a shovel, knocking her out! Days of Our Lives viewers will see that is how Abigail gets sent to the island like Sarah did back several months ago, Kristen likely advising Ava where to go with her, and possibly Gwen helps!

Meanwhile, in Italy, Kristen has found that she’s had to change hiding places – Steve “Patch” Johnson (Stephen Nichols) and Kayla Johnson (Mary Beth Evans) had infiltrated the convent in Italy where she’d hidden before. Days of Our Lives viewers will remember that Kristen had left Patch on the floor after a confrontation, possibly dead, and she’d taunted Kayla over it and they struggled over a gun which went off!

Days of Our Lives viewers were left with unanswered questions as to whether Steve was alive and what happened to Kayla, but obviously Miss Phoenix managed to rise again from the ashes and flee the convent! The most obvious place for Kristen to flee – once again – is the island where she’s got Sarah captive and now Abigail as well; Kristen should probably stop assuming no one will look for her in obvious places, but no one knows about this one! Except, perhaps, Tony DiMera (Thaao Penghlis); since this is probably the same island he was kept on for years!

Days Of Our Lives Spoilers – Abigail DIMera Wakes Up On An Island, Looks For Sarah Horton, Finds Kristen DiMera

Days of Our Lives viewers will see Abigail finding herself on an island, probably with a goose egg on the back of her head and a terrible headache, but she won’t have amnesia! As an investigative reporter, she will have trained herself to look for small details and remember them, and although she won’t know it was Gwen who knocked her out she’ll remember it was Ava who she tore the Sarah mask off of!

Days of Our Lives viewers can imagine that Abigail will put the pieces together that Ava must be working with Kristen or she wouldn’t have had that mask nor knew how to use it. She will also deduce that the island she is currently on may be where Sarah was taken also, and she’ll start looking for her – and she’ll find Kristen, and she’ll face off with her! Of course, “facing off with Kristen” may well start with trying to tear Kristen’s real face off if she can get at it unless Kristen still has that gun and prevents her from doing so!