Days Of Our Lives Spoilers: Rafe Is Arrested For Planting Evidence! 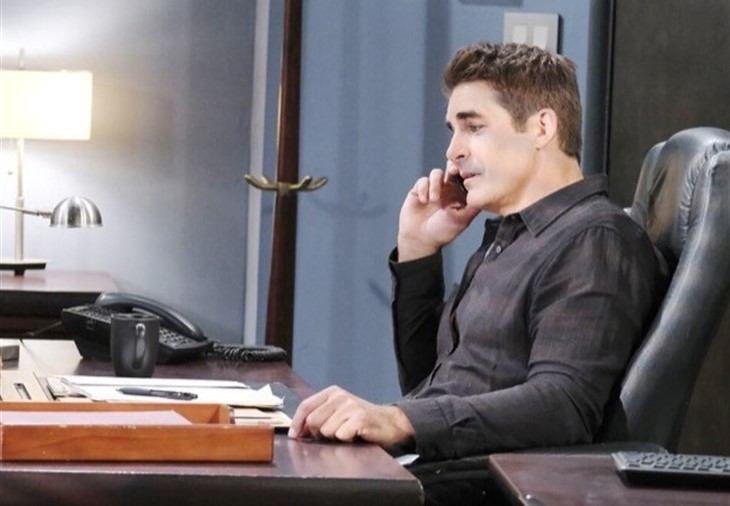 Days of Our Lives spoilers tease that Rafe Hernandez (Galen Gering) will indeed be arrested for planting evidence in some of his past cases, in upcoming episodes of Days of Our Lives!

Days of Our Lives viewers will recall that Ava Vitali (Tamara Braun) has had it in for Rafe and Nicole Walker (Arianne Zucker) ever since she overheard Chloe Lane (Nadia Bjorlin) and Brady Black (Eric Martsolf) talking! Days of Our Lives viewers will recall that on Halloween night, Rafe and Nicole had a sexy romp on the Basic Black conference table, and Chloe and Brady had talked about the scandal as Ava was outside the door! Ava has been bent on getting revenge ever since, and especially Rafe, although she did murder Duke the Bear by decapitating him and leaving him on Nicole’s desk, after which she had a nightmare about him coming for her!

Since then, Rafe has been in trouble at work, where he is the Salem Police Commissioner – he’s been turned into internal affairs after an audit of his old cases, suspected of planting evidence and framing perps! Days of Our Lives viewers will see that Rafe is suspecting Ava is behind this turn of events more and more, and talks to Nicole about it.

Days of Our Lives viewers will see that Rafe thinks Ava has been acting “off” lately, but he cannot quite put his finger on it; but he suspects that somehow she found out about his and Nicole’s night on the conference table! Rafe will come to a decision in upcoming episodes of Days of Our Lives to break up with Ava, and it will be difficult because they have been living together for quite a while.

Rafe is conflicted, because he cares deeply for Ava, but it just doesn’t feel right in his heart for a police commissioner to be involved with a mob figure, even if she has left the life. Plus, all the questions and suspicions at work have been forcing the issue of perhaps he shouldn’t be involved with Ava. His heart is leading him towards Nicole, even if she is hesitant to move forward with him because of her very recent divorce from Eric Brady (Greg Vaughan)!

Days Of Our Lives Spoilers – Rafe Hernandez Is Arrested And He’s Angry!

Days of Our Lives viewers will see that Shawn Brady (Brandon Beemer) is put into an extremely awkward situation, and as Rafe and Nicole are talking, he comes to arrest Rafe! As Police Commissioner, Rafe is actually Shawn’s boss, but Shawn explains he doesn’t have any choice – a third perp has corroborated the testimony of the other two accusers, and he has to bring him in! Days of Our Lives viewers can imagine that Rafe is pretty upset, and angry and frustrated – he has been so careful to follow the law and here he’s being arrested!

Rafe’s suspicions are even more heightened as suddenly Ava walks in on the scene, but he keeps his suspicions from her for the moment, even though Ava can somewhat see through him! Then Nicole decides she needs to confront Ava and ask her some very pointed questions!

Days of Our Lives viewers will then see Nicole pay Ava a visit, and the two women each hint they know what the other has done, in a game of cat and mouse! Meanwhile, at the Salem PD, Rafe tells Shawn that he believes he’s been framed by Ava, and he tells him why; he thinks she found out about him and Nicole, cheating on her. Days of Our Lives viewers will see Shawn set out on an investigation of Ava’s criminal connections, to see if she’s “done business” with any of Rafe’s accusers. In the meanwhile, Rafe hopes Shawn can find the proof that he’s been set up!