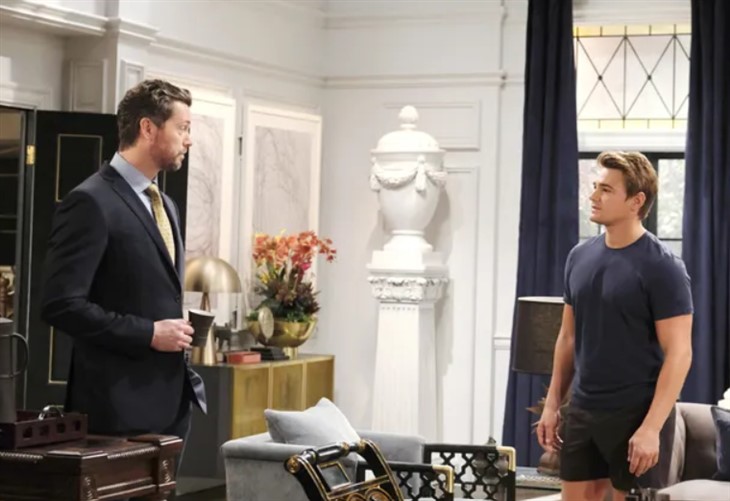 Days of Our Lives spoilers suggest that Johnny Dimera (Carson Boatman) will soon return home to leave the news that Ava Vitali (Tamara Braun) and Susan Banks (Stacy Haiduk) have been killed. Johnny will lash out at his father who he feels is to blame for it all.

Days Of Our Lives spoilers reveal that Johnny will lay the sole blame for his grandmother Susan’s death on E.J. Dimera (Dan Feuerriegel). After all, if E.J. hadn’t taken everything from Ava, this would have never come to pass. Is Johnny right to blame E.J., especially when he is suffering so badly? Has E.J. been punished enough?

E.J. chose not to listen to Tony Dimera (Thaao Penghlis) and pay the ransom money. E.J. also chose to kidnap Tripp Johnson (Lucas Adams). E.J. single-handedly ran Ava over the edge causing her to break mentally. Johnny knows that his father could have and should have handled this differently. How could anyone blame Johnny for calling out his father?

Susan was the weirdest grandma that a boy could have. Susan was the polar opposite of Marlena Evans (Deidre Hall). Susan was fun-loving and special. Susan acted almost like a child herself so she was easy for her grandchildren to relate to. Susan had a special place in her heart for Johnny because he was so special to her.

Johnny was sick when he was younger and Susan was grateful that he survived. Susan had just recently joined forced with Johnny to find out what E.J. had done to Stefan Dimera (Brandon Barash). Susan believed in doing the right thing no matter what and told E.J. as much when she covered for Johnny. Susan also knew that Johnny still had a soft spot for Ava whether she liked it or not.

Days Of Our Lives Spoilers – E.J. Dimera Shouldn’t Have Chased The Car

After everything else E.J. had done, he should have called the police and not chased Ava’s car. E.J. was doing nothing but upset Ava more and he should have been able to see how distraught she was. It’s not like Tony and Johnny didn’t try to talk E.J. down. Even Anna Dimera (Leanne Hunley) knew that this could end badly. However, E.J. had to have things his way.

Any way you look at it, Johnny is right. Ava never should have kidnapped Susan but E.J. should have backed down instead of continuing to push her. Tony tried to remind him of Ava’s fragile mental state but E.J. chose not to listen and to gamble with his mother’s life, a gamble he sadly lost.